Synopsis
Hazel, Fiver and Pipkin organise a raid on the farm to free some does from a hutch, to come and join the down.

Favourite Quote
"You're not going to do something foolish and Bigwig-ish, are you?" - Fiver

Personal Review
After the brilliant episode 5, this one is a bit of a let down. This is the first time the producers use the technique of 'start a storyline, have a completely unrelated episode in the middle, then continue the story'. It becomes commonplace later on.

After the Efrafan plots of the last few episodes, one involving a raid on a farm seems a little mundane. There's also little use of the full range of characters, with most of the episode being carried by Hazel, Fiver, Pipkin and Kehaar. There also seems to be real timing issues, in that Kehaar tell's Hazel to 'rest his wounded leg for a while' so it can heal... by the evening, he's already walking fine, with barely a scratch on him. Also, there's another little thing which does keep niggling at me. Kehaar goes on about how his bird Natasha went missing one day, and never came back. He also says she's 'The only bird for Kehaar'. Now, in series 2, he actually goes on about how he misses his bird Katrinia, to the extent they go to the Big Water see her. I would hope I've just missed an important bit in an inbetween episode here, otherwise this is quite a big mistake (Even eclipsing last episode's 'nighttime railway' flaw).

Despite this, there were some great moments. Whoever provides the voiceovers for the hutch rabbits were brilliant. There's one of them does a brilliant line saying 'oh, it doesnt do to eat quickly... give's one a funny tummy'. I find it almost paints an image of an old ladies coffee morning (no offence intended). The almost 'snobbish' attitude of the does is portrayed brilliantly. Still in the barn, there's also my favourite phrase (mentioned above) when Hazel is about to challenge the cat, to which Fiver says 'You're not going to do something foolish and Bigwig-ish, are you?'.

This episode recieves the lowest score of the series so far. Dont get me wrong, it was still good, but the sudden change from the Efrafan storyline, coupled with the Natasha/Katrinia thing keeps the score down. Perhaps if I find I've missed the logical explanation for Kehaar's different names later on, I might give it an extra star. 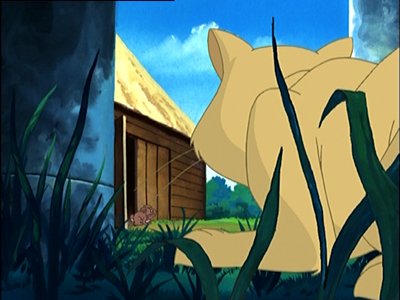