Episode Name
The Eyes of Silverweed

Synopsis
Under orders from Woundwort, Silverweed invades Fivers thoughts to find Watership Down, leaving the Watership rabbits with no choice but to liberate him from Darkhaven.

Favourite Quote
"In a place that breeds intrigue and lies, truth is a weapon to be used when the time is right." - Spartina to Campion

Personal Review
A very strange opening for this episode, strange in that it starts inside of a nightmare, certainly opens up the tone for this episode. It's an episode where any doubts people may still have had that the series is descending into fantasy can probably be quashed.

The main premise of the episode, or at least we can presume it is based upon the title, is that Silverweed can see through Fiver's eyes by dropping into his mind. I have to say there are sections of this which well and truly freak me out. Despite hearing the line numerous times, there's still something chills me every time I hear Fiver shout 'Get out of my head'. It's interesting to note that Woundwort shouted exactly the same thing to Fiver in Episode 5. Could it be a reference to the past cropping up again?

This dream-dropping idea does seem to lack any real continuity with everything in the series so far though. For a start, if Silverweed could do this, how could Hickory and Marigold have ever led an effective revolt against Cowslip. Cowslip suspected there was something going on, so why didn't he just get Silverweed to look in their hearts. Also, where has Fiver suddenly found all this power. He's told us repeatedly he can't make his visions come; how he doesn't control his psychic abilities, yet now he's capable of controlling someone else's mind. If that's the case, why did they ever need to worry about Woundwort and Efrafa in the first place? Fiver could simply have gone into the General's mind, and thwarted all his plans and... I'm going to shut up about this now, as clearly I'm putting more thought into this particular aspect than the writers did! =:o

The other main events in the episode happen in Darkhaven. Although we've heard the name of Woundwort's mother before (episode 5 again coincidentally), it's the first time they've ever actually mentioned the name of Woundwort's father; Hemlock. It's a shame they don't mention the name of The Speaker of the Past. It's a minor niggle I know, but it gets a bit tedious hearing them only ever refer to her as 'The Speaker of the Past' or 'teacher'. What's really her name!? Whatever it is, I'm convinced she's not just a teacher, but rather the Demon Headmaster. By the time we see Blackberry again later (just before Campion speaks to her), she's sitting there apparently glassy eyed and contented!

Once again it's Vervain who steals the limelight though, with some brilliant scenes. The running joke throughout this episode involves everyone challenging him to single-combat, something which Vervain, not surprisingly, isn't too keen on. The way David Holt screams 'No!' to the third rabbit who challenges him makes me laugh every time. He does get a chance to show where his real strength lies eventually though. Not in bravery and skill in fighting, but in knowing how to cheat and take full advantage of a situation. I feel sorry for him actually. He goes to all that effort with the tyres just to 'beat' Granite, and still ends up suffering for it. Ah well, I suppose we can't help but laugh at his misfortune.

Complaints about the episode? Well, I'll not dwell too much on the 'realism' aspect, as that's pretty much how the rest of the series goes. Whilst I'm still not keen on it, it does lead to a nice ending eventually. The only other thing that does bother me is some of the sickening sentimentality the episode gets tied up in. There's far too many of these 'Oh Blackberry, you mean the world to me. My life is now complete.... etc etc' scenes with Campion. Oh, and I do think they should have made Silverweed seem a little less clueless. I mean, what rabbit with any degree of sanity would say 'Oh, and lovely Primrose!', unless of course someone has secretly kidnapped the real Primrose and replaced her with a kind, loving and non-selfish rabbit. =:P

I love all the Vervain bits, but introducing some of these wildly over-the-top psychic powers just leaves far too many unanswered questions. 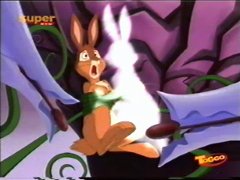 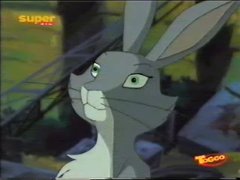