Synopsis
Redstone Warren is destroyed by man, whilst Campion is taken prisoner of Darkhaven Warren. Very soon, he's battled his way to the chieftainship of Woundwort's former home.

Favourite Quote
"My life is no longer my own. Losing it seems like a small matter." - Campion

Personal Review
This episode seems a little strange in that, after the weeks of building up the Redstone plot, they writers seem to completely change direction. Personally, I like this episode, mainly because of the use of characters in it, both new and returning.

It's the first chance we get to see the rabbits of Darkhaven warren. Well, okay we did see them in a vision before, but it's the first proper chance. Now there's some interesting character design. After all the plain generic rabbits at Redstone, it's nice to see some imagination in the drawings once more. Okay, so having Green and Orange looking rabbits with feathers in their ears is a touch warped, but at least it's imaginative. The voiceover cast is quite a nice mix too. =:)

Much more importantly, in my.... um... totally unbiased opinion, is one of the returning characters. The ever-popular Cowslip is back. He has changed quite a bit since the past series though, and that's apart from the lack of Stephen Fry. For a start, he's inherited the 'Lost a lot of weight' look that seems to have struck many of the characters. Looks like Man has been cutting back on the flayrah he's been leaving out. Perhaps it's something to do with the decline in the British Farming Industry. =;) I also don't think he seems quite as cryptic as he did at one point. Talk more nonsense, Cowslip, for without it, we are unto the wind, our fur bristling like an ever-lasting... *ahem*.

Although Cowslip may seem a little more toned down, the warren in general seems to have become more mysterious and warped. Silverweed's poetry is marvellously obscure, and watching the other rabbits dancing in unison in some sort of trance is incredibly eerie. Plenty of humour from Vervain at that point too, with him fearing they will 'catch' the madness. It has to be said, he has some wonderful facial expressions.

Actually, Vervain's character in this episode is quite interesting, in that it seems to reveal a different side to him. Whilst Cowslip and Woundwort bask in the glory of watching Redstone Warren bulldozed by Man, Vervain actually tries to persuade the General to help. Reminding him 'They are rabbits, after all'. He's also clearly becoming tired of Woundwort claiming everything is 'part of his destiny'.

Campion is in typically miserable mood. It's interesting how they've really managed to portray him as a lost soul this series; a wanderer with no place left in the world. It's all summed up by his incredibly self-reflective line "My life is no longer my own. Losing it seems like a small matter.". It's that old 'Is he dead, or isn't he?' chestnut. Just an obscure note for anyone who's interested actually. At one point he fights Granite, leader of Darkhaven, in what is, quite frankly, a pathetically easily won battle. Granite is defeated when a load of oil drums fall on him. Now of course they don't kill him, yet I'm sure some of this scene was axed from the German version of the episode, presumably because it was thought of as unsuitable for young audiences.

Bad points of the episode. Well, for a start, there's Fiver's vision about Hawkbit being crushed under a load of rock. How dare they hurt my Hawkbit! =:o I suppose it did lead to some laughable scenes with Strawberry keeping him underground to keep him safe, but even so! Also, this road they're building. They already have a busy roundabout in the middle of the countryside, and now they need another road. I'm sure the countryside really wouldn't be this busy! Finally, there's another one of those terribly obvious uses of repeat animation in the last frames with all the Redstone rabbits running up a hill. Surely they could have made it just a tiny bit less obvious.

Lots and lots of wonderful new characters, and some brilliant humour. Oh, and did I mention Cowslip was back! =;) 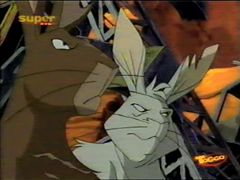 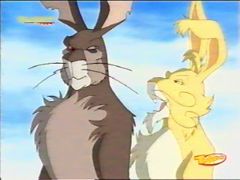