Synopsis
Woundwort works his way to chieftainship of Redstone. Meanwhile, Kehaar decides to leave the warren for good with his new mate Gluck.

Favourite Quote
"Remind me to avoid true love then!", Bigwig, about Gluck and her loud noises

Personal Review
This is one of those episodes which has a huge bearing on the build-up to the series finale. Still no sign of Cowslip, but as I know he's back next episode, I'll not complain. =:) The main premise is a continuation of where the last episode left off, with Woundwort doing all he can to please the Redstone rabbits and worm his way into their affections.

This does tie in to some interesting character exploration. We find out that, despite his usual strong appearance, Hickory believes himself to be a total failure to the warren, and that Woundwort (or Weedstalk) is helping him become the leader he could never be. It's a thought which blinds him to all truth, even forcing him to ignore his beloved mate Marigold. Indeed, whilst we can all see the warren fast turning into a clone of Efrafa, he doesn't see the problem. The question here is, is this doubt something which has always been in his heart, or is it something which Woundwort has planted there?

Woundwort's character is also interesting. Previously, the depiction seemed to fall more towards his strengths in fighting and power. This episode continues to explore his strength on an intelligence basis. He clearly knows how to make the Redstone rabbits believe every word he says. In fact, it's amazing to hear just how he can change his voice as the situation demands, from ruthless and nasty, to calm and understanding, such as when he addresses a suspicious Marigold who overhears him discussing war. I really wish someone would tell Woundwort the name of Watership Down though, as it sounds odd to still hear him constantly referring to the warren as 'Hazel and his outsiders'. Surely one of the Redstone rabbits must have mentioned it to him at some point.

The best character in the episode has to be Gluck though; Kehaar's new mate. Even her voice I found funny, and certainly a lot more pleasing on the ear than Katrina (or Natasha... whatever she's supposed to be called!). Actually, everything she seems to do makes me laugh. For a start, she frightens Hannah with her early morning call. There's also a funny little scene later on with her putting on a posh voice to apologise to all the rabbits for her mistakes. The most humourous of all has to be her interaction with Bigwig though. Everything she does seems to torment him. She follows him around all day talking about absolute nonsense. That look on Bigwig's face is priceless! There's also a scene with her teaching the youngsters to spit cherrystones. She spits one out across the down... then cut to a shot of Bigwig yelling 'Ouch!'. =:D You almost have to feel sorry for ol' Bigwig sometimes.

Overall, the best scenes of the episode came towards the end. There's a beautiful scene with Marigold being persued through the woods by Woundwort and Vervain, under a golden sky. Alongside this, a piece of the wonderful series 3 music plays. It all builds up to a climax with her apparently being killed by a Hrududu by the roundabout. The combination of the headlights, and the expression on Woundwort and Vervain's faces is truly heartstopping. After they've gone, we find out she's safe of course, with the deeply inspirational line 'Frith... gave my feet wings'.

The other scene towards the end was Kehaar's final leaving. I'm sure I'm not the only one who has the feeling that it was only done to avoid the problem of him being able to warn the Watership rabbits from the sky in later episodes. Still, besides that, I didn't think it was particularly well done. It did have some nice lines, and once again the music helped paint a picture. The thing which I found spoiled it was Kehaar's delivery. I just don't think his new voice works. Perhaps Rik Mayall could have pulled off an emotional nicely, but his replacement just fails to convince me.

Any other niggles with the episode? Well, I did have one little gripe with the animation. Just about everytime two guards appear onscreen to stop someone at Redstone, they're identical twins. The same template appears to have been used for them both, just with the colours changed. I know it's a money saving tactic used by most animation studios, but it's a technique which can only real pass off unnoticed when there are more than 2 characters on the screen!

A nice episode, mainly pleasing due to the brilliant characterisation of Kehaar's mate Gluck! 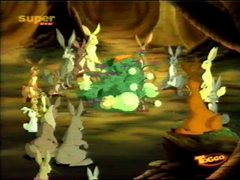 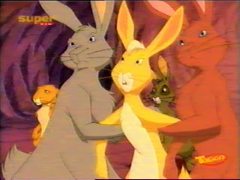