Synopsis
The Down is overrun with a flock of sheep, who soon bring trouble for the rabbits.

Favourite Quote
"See! It's all in how you talk to them!", Bigwig triumphantly, just before being headbutted by a goat

Personal Review
Hooray. An episode with a title such as 'The Invasion' has to be good... doesn't it? Well sadly, not this time. The invasion is basically a load of sheep coming to live on the farm, and bringing all sorts of problems, such as eagles and ruined grass with them. A huge letdown really, from such a promising title.

Personally, I found the whole episode to be the worst of the 'padding batch'. There seemed little point to it. In fact, I suspect the only reason it is actually there is to give them an excuse to use the scene from the book where Hazel and the other rabbits lead the Dog onto the Efrafans. There is one reference to the main plot with Efrafa, in that we hear Hawkbit and Dandelion arguing over Campion. Judging by the lack of anything new being said though, it seems a rather pathetic attempt to pretend they haven't 'forgotten' about the main storyline.

Okay, then. The good points. Well, there were still a few. Bigwig had some great scenes this week, such as his diplomatic attempt to get rid of the sheep by talking with their leader, the Goat. You have to laugh at him turning to gloat, moments before being headbutted by the goat from behind. There's also a few laughable lines by him when Hawkbit and Dandelion are attacked by the eagle, such as his description of them, 'A right pair of twits'. After they make it back to the down, they then knock everybody over, and we hear Bigwig mumble from the bottom of a pile of rabbits, 'First, why don't the lot of you, get off my back'.

It's also nice to see Captain Broom taking a leading role in this episode. He's seen numerous times, telling everyone of his experiences with the sheep. What is strange is that although we see him and the babies (At least seven I tell you! Seven! It just gets worse!), I never noticed any sign of Primrose. Typical! She's around in every episode, then when there's an Eagle flying above the down, she's nowhere to be seen.

The main negative points I found, apart from the overall plot, are based upon the lack of continuity again. An interesting example which caught my eye can be found in the 'morning after the storm' scene. Hazel wakes up, and walks past several other sleeping rabbits, including Blackberry, to enter the Honeycomb. Upon entering the Honeycomb, however, there's Blackberry wide awake in the middle of the discussion. Um... did I miss something! Later on, there's also the scene where they go to find the dog. Hazel says he'll try talking to her and telling her where to find her sheep. They already established in Episode 10 that the dogs no longer remember the language of the rabbits, probably having abandoned it to live with man, so why did he even bother. That does bring me onto another anomaly I noticed in the chase scene. The second in line are Fiver and Dandelion, and we're told it's a dual run as they're the two slowest rabbits on the down. I'm sure that's a complete change from the book, as Dandelion was supposed to be fast. (I'll have to check up on that, so dont quote me). Besides, having 2 slow rabbits running together doesn't make them any faster. If anything, it makes more of a target for the dog. One final thing which really gets to me is when the rabbits keep pointing out how the sheep are tearing up the grass on the Down, ruining it. I've looked again and again, and still can't tell any difference! Perhaps I'm just going blind in my old age. =;)

Lots of continuity errors, and a lacklustre plot, give this episode a low score. 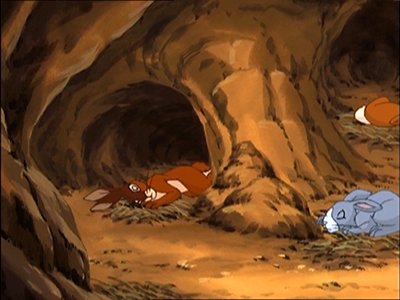 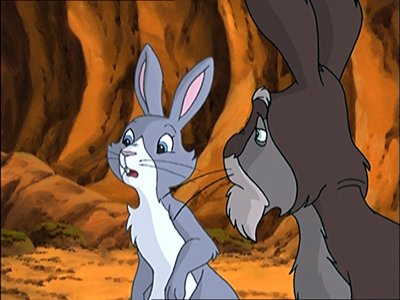