Synopsis
The Watership Rabbits and Kehaar finally arrive at the coast, where Kehaar meets up with his bird Katrina (grrr)

Favourite Quote
"And just where would we go?" - Hawkbit, when all the rabbits are stranded on a rock

Personal Review
This is one of those rare episodes that I found so bad, I'm going to jump straight into tearing it apart, before even looking at the nice aspects. There's numerous things I dislike about it, but without a doubt the biggest of these has to be the major error in the continuity. It's the worst I've come across in the entire 2 series. Basically, in this episode we finally meet Katrina, Kehaar's bird. Now that in itself isn't too much of a problem, apart from one thing; She isn't supposed to be called Katrina!

I first mentioned back in episode 6 how Kehaar talked about his mate Natasha, and how she hadn't come back one day. Now there was no mention of a second bird there, indeed he said she 'Was the only bird for Kehaar', but perhaps he'd found a different mate called Katrina. Scorn can soon be poured upon that theory if you check out the official episode guide at watershipdown.com. There, it quite clearly states in the episode synopsis:-

"Night draws in and the rabbits find themselves trapped on a cliff edge as the tide comes in rapidly. Kehaar flies by with his old girlfriend Natasha - he's been relishing seeing his old friends but feels a little different from them. When he spots his trapped friends, he turns to the other seagulls and Natasha for help. They are scornful of his loyalty and friendship with the rabbits and refuse to help. Kehaar realises his true friends are the WATERSHIP DOWN rabbits who have taught him their noble, worthy ideals. "

(It can be accessed here, as the official site isn't working at the moment.)

Hence, I remain convinced it should have been Natasha. I wonder if someone was fired for that appalling mistake!

Putting that aside, there are a few other smaller things which bother me about this episode. Firstly, how come every single gull in this episode looks the same, apart from Kehaar. I know they wanted to emphasise Kehaar was different to other gulls, but they could have put one or two marks on some of the others, just to add some realism. Also, Hyacinth sniffed out this bus as being 'a bus for the seaside'. Considering the sheer amount of UK Coastline, isn't a bit unrealistic that this bus just happens to stop at the area where Kehaar lives. Some of the extra voiceovers in this episode are pretty awful too. The first time we see Katrina, and she screeches 'Ke-haar' is awful. It's bad enough in English.... but in the German version, well... I physcially have to resort to muting the audio for a few seconds, as it's so cringingly bad! And finally, to tie up my list of complaints, why has everyone this week suddenly started calling the ocean 'The Great Water'? In every other episode, it's been referred to as 'The Big Water'.

Good points? Not a great lot really. Well, there's plenty of humour with Hawkbit. In fact, writer Anna seems to be on some sort of 'Anti-Hawkbit' campaign this week. She drops him off cliffs and soaks him in water. Still, it gives us all a laugh (or at least me!). I think that's about all the praise I can come up with though!

This episode only receives 2 stars... and even then I think I'm being generous. Only the plot and some of the humour claw back that score, as just about everything else was terrible. Awful, unjustified and blatently careless continuity mistakes, and irritating voiceovers make this a one to miss! 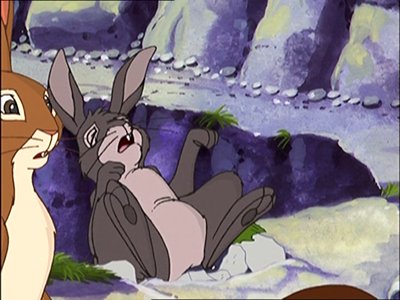 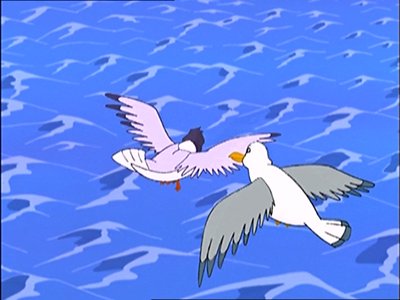