Synopsis
Hazel takes Primrose back to where she grew up, Redstone Warren. Meanwhile an old friend, the weasel from episode 2, returns to seek revenge upon Watership Down.

Personal Review
Not surprisingly, I found this episode pretty tame in comparison with the last. It's certainly not one of the worst though. Now that Primrose is out of Efrafa, it's time for the writer's to begin developing the love relationship between her and Hazel. Now, there's no hiding the fact that I hate Primrose. I dont really know why, there's just something about her which has always irritated me, hence I'm always going to be slightly biased against any episode concentrating largely upon her.

Despite this, there were some good bits to the episode. It was great to see the Weasel from the second episode back to cause more trouble on the Down. I'm still of the opinion he should have been given a name if he was to be a recurring character, but never mind. The voiceover for him always does a great job, superbly putting across his sinister nature (Even the German counterpart does the job well). I did kind of find the way he was dealt with at the end a bit disappointing though. After building up the suspense and tension throughout the entire episode, reaching the climax with him attacking Fiver, it's all tied up in a matter of seconds. We suddenly see Bigwig and the other bucks jump on him, and that's the last we ever see of him in the series. If it were that easy to get rid of the weasel, why didn't they do that the first time round?

One of the best scenes was where Primrose and Hazel are trying to cross the canal. The action with Primrose battling to keep afloat, whilst Hazel encourages her by reminding her of Redstone, certainly kept me on the edge of the seat. Of course, this scene did have me wondering whether I should consider seeing a psychiatrist. When Primrose fell in that water, I suddenly found myself chanting 'drown, drown, drown', which I'm sure cant be that healthy!

In the episode, we also meet Captain Broom for the first time. I always find his character to be a bit underplayed. Despite having a celebrity voice actor, in the form of Richard Briers, who provided the voice of Fiver in the 1978 movie, there's no special mention of him. Just the usual bit on the end credits. He certainly puts his heart into the character. You cant help but feel sorry for the poor captain, who at first glance appears to be going mad, when you hear him speak.

Which brings me on to another of the plotlines in the episode. The storyline with Primrose being forced to let go of the past. This has certainly been well planned out, building up throughout the entire episode with her resilience to get back home, only to be heartbroken to find everyone gone. Some of the scenes at this point are really touching - yes this must be about the only time I feel sorry for Primrose. The way her feelings are tied into Captain Broom's actions also works well. As long as she clings to the past, he does, imagining everyone in the warren to still be there. As soon as she finally let's go of the past, so does he, suddenly speaking about how everyone's suddenly disappeared. It's the sort of situation which cant help but make you wonder about Captain Broom; is he really insane, or is it all an act?

The only major thing to bother me about this episode is the love scene. The humour leading into it is great, with Hazel muttering 'I love you... did I just say that out loud?'. The follow on bit wasn't quite as good. Played to Thank You Stars, it shows lots of brief clips of Hazel and Primrose together from other episodes. Included in this are several shots from the Christmas specials - indeed these specials are the basis for the name 'Thank You Stars', as that's what Kehaar says when he finds a way home. This does seem a stupid thing to do though, bearing in mind the specials were moved to halfway through the second series. It also looks strange, seeing the clips constantly switching between snowy scenes in Winter, and sunny scenes in Summer. Bearing in mind Primrose only arrived at the warren in the previous episode, I'd love to know when all this time is supposed to have passed!

Nowhere near as good as the last episode, but still not a bad way to build Primrose into the picture. The introduction of Captain Broom is also a major highlight. 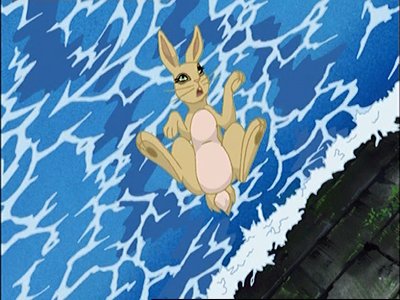 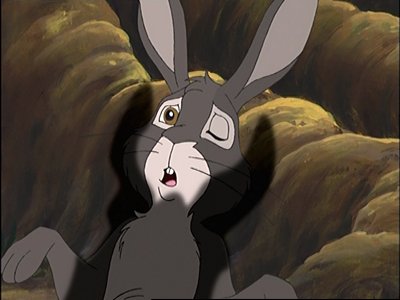