Synopsis
Bigwig, undercover in Efrafa, works with Hazel on a plan to rescue Blackavar and Primrose from Efrafa.

Personal Review
This episode was brilliant. Much as I enjoy all the Efrafan episodes, this was certainly one of the best. Almost instantly, the episode jumped into the quality which it would sustain throughout. The first scene involved a fox coming across a carving of another Fox's skull in the woods, which, as is explained later by Campion, is what happened to a fox who invaded Efrafa. This powerful imagery helps portray the sheer military might of Efrafa and Woundwort, sending out a clear message that nothing can stand against him.

Inside Efrafa, the writers continue with their portrayal of the misery of the Warren. There's the first scene where two bedraggled rabbits instinctively cower in fear at the sight of Bigwig, an Owsla Captain, despite his attempts to reassure them. There's also a later scene where two rediculously old looking rabbits are attacking an innocent doe. Both of these help paint the bleak picture of life for the rabbits in Efrafa.

The best bit of the episode though, without a doubt, has to be the final chase scene. As The Watership rabbits run through the woods, with the Efrafans in close pursuit, we're given numerous closeups of each of the characters, during which we can see the sheer determination Woundwort has. As usual, the Royal Philharmonic Chase Theme plays in the background. The difference being, the lesser-heard Efrafan bars are played (This bit if you're wondering).

Of course, as with all the episodes, there were some bad points and, as usual, it was some of the ludicrously unbelievable plot which let it down. Firstly that escape tunnel dug by Primrose. It was obviously there to try and make Primrose appear a strong character, similar to her counterpart from the book Hyzenthlay. However, I think it's a bit over presumptuous to expect us to believe Primrose could dig a whacking great hole only a few metres from an Efrafan patrol, without any of the Efrafan's noticing.

The next unbelievable scene is where Bigwig, Primrose and Blackavar are running through Efrafa, and they find their path blocked by Efrafan guards. Much as Bigwig is a strong rabbit, having him knock down two massive strong guards as if they weren't there is still a bit far-fetched. Immediately after that, the plot worsens. Primrose meets up with Hazel again, leading to one of those cutesy love scenes. They stare longingly at each other for ages. This obviously seems to neglect the fact that the Efrafans are right behind them, and could easily have caught them, killed them, and gone for Silflay in the time those two stood around.

These plot holes are minor though, and dont detract in any significant way from the overall brilliance of this episode. I still loved it, and have named it as my second favourite of the entire two series - That's impressive considering I only have the German language version of it, and I cant fully speak the language!

A brilliant episode, well worth the top score. The sheer amount of nail-biting action, and the combination of music and imagery to create the atmosphere of Efrafa, make it a top episode. 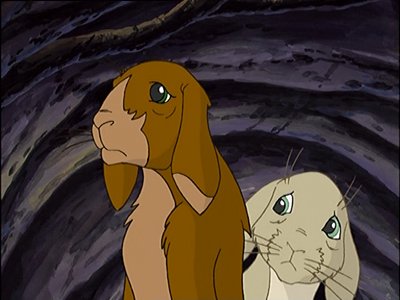 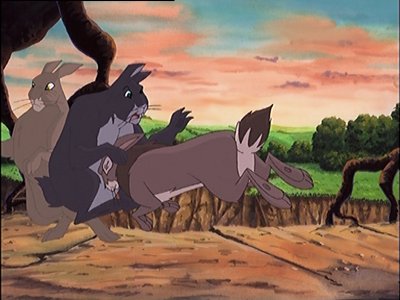