Synopsis
Hazel, Fiver, Bigwig and Kehaar go to Efrafa to try and find some does to join them. They soon find out just who they are dealing with.

Favourite Quote
"You ask which I prefer; War or Peace. I answer War!" - General Woundwort

Personal Review
Without a doubt, this has to be one of the best episodes of the series so far, and certainly ranks amongst the top episodes overall. After seeing the first signs of Efrafa in the last episode, with Campion and Vervain, we finally get to meet General Woundwort. For a first appearance, the dialogue and animation have been beautifully combined to instantly establish his evil character. We see him sentence an attempted escapee to death.

The one sentenced to this is an interesting character too; Blackavar. Always makes me laugh at the strange haircut the animators gave him, but it's the voiceover which is noticeable. Its Stephen Gately, the singer who provides the vocals for the modern version of Bright Eyes. Having a character with the irish accent is great. It's just a shame Stephen only does the voice for a couple of episodes.

Of course, he never actually does die, thanks to the intervention of another new character - a doe called Primrose. Now, Im not going to hide the fact. I hate her!! Her voice is dull, the character animation is bland and.... well, I just dont like her. Sadly, Hazel falls for her, so we know we're going to be seeing more of her. Besides this, Character interaction in this episode is certainly one of the high points. The scene between Woundwort and Fiver, where Fiver can see visions of what happened to Woundwort when he was a young buck is particularly moving. Its great to see even the strong General showing a moment of weakness where he cowers shouting 'Get them out of my head'.

As usual, the humour is never lost, even in such a dark episode. My favourite has to be part of the chase scene. Fiver is exhaused, and tells Bigwig to go on without him. Bigwig's wonderful encouragement is hilarious - 'get moving you pathetic pondweed' (or something like that).

The only real flaw I noticed in the episode relates to the railway (or iron road). The first time the rabbits cross it on the way to Efrafa, its suddenly become nighttime. Now, as the journey there is a long one, we could just assume several hours have passed. Where this is less forgivable is on the return journey. There the Watership rabbits are fleeing for their lives, pursued by Woundwort. One second in the wood its broad daylight. The next, where they cross the railway, its suddenly nighttime, before magically becoming daytime again seconds later. It's not the biggest mistake I've ever seen, but it's certainly quite a stupid one.

Finally, another interesting thing about this episode is the number of clips from it which appear in the future opening titles. From episodes 1 to 5(this one), we've only seen the version starting with a map of the down. From episode 6, a different set takes over, using an awful lot of brief snapshots from this particular episode. Just a bit of useless information for you all.

A brilliant first appearance for General Woundwort, and fast-paced action involving Efrafa, give this episode a high score. It was very close to a 6, but that little mistake with the Railway keeps bugging me. More unforgivably, its the first appearance of my least favourite rabbit Primrose. For this reason, it only scored 5. 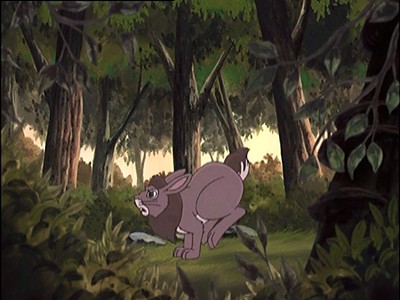 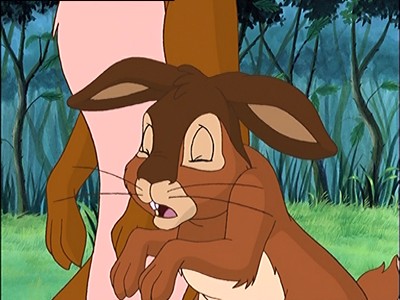