Synopsis
Free from Cowslip's Warren, Strawberry begins to settle in at the Down. Meanwhile, Bigwig hears of a vicious warren called Efrafa, and investigates further.

Favourite Quote
"Not Sleeping! I was... guarding the clover and ...er... defending it!" - Strawberry

Personal Review
This episode had some good parts, and some bad parts. Strawberry is a brilliant character in this episode. Every time we see him, he's lazing about. The humour added to this is classic, with Strawberry coming up with great excuses for not working. The best of these has to be where he's fallen asleep in the clover... oh but of course, hes... um... 'Guarding the clover'.

That 'bucks dont dig' storyline appears again.... okay, it is starting to get a bit tedious now, but at least it always guarantees a laugh, with the Buck's finding every excuse under the sun not to dig. Another classic part of the episode has to be the Owsla training. The first training session at the beginning has all the rabbits fumbling about, and going the wrong way. To top things off, we have Hawkbit's perfectly-timed sarcasm. It's also funny watching poor Pipkin trying to tackle the training, and failing.

The most significant part of the episode, however, has to be the introduction of the Efrafans. No sign of Woundwort yet, but we do see both Campion and Vervain. This is where my main disliking of the episode comes in. In later episodes, Campion is a brave, strong character, who could easily tackle many of the other rabbits. In his first appearance, however, he appears weak and pathetic, clumsily slipping off rocks in the chase scene - This is not the Campion I know and love! Still, at least having the Efrafans ensures some fast-paced action, especially when its accompanied by the brilliant 'chase' score performed by the Royal Philharmonic.

The only other part I dislike is the scene where Strawberry is talking to a frog. This should be a deep emotional scene, with Strawberry contemplating his life and future actions. In my opinion, its ruined by the frog sticking in occasional words such as 'change' and 'good look', trying to sound like a croak. I just find this irritating.

The amount of action in this episode would have given it a top score, however I stopped at only 4, purely as a result of the weak first appearance of Captain Campion. 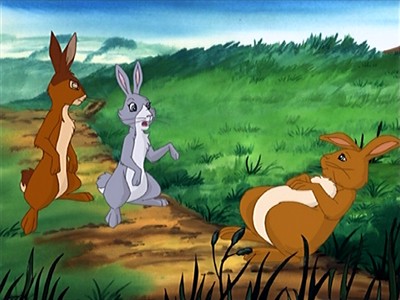 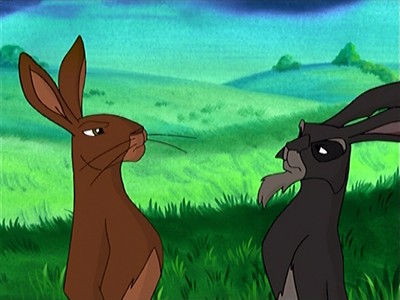