Synopsis
Woundwort, Vervain and Silverweed arrive at Darkhaven, just in time to meet up with Campion. At the same time, Hannah learns magic so she can help her friends.

Favourite Quote
"Only two things can turn a good rabbit's heart to stone. Love and Hate. Which darkened yours?" - Spartina to Campion

Personal Review
This is the episode where everything really starts to happen (although I seem to have said that before!). We see the reuniting of old characters, and the new army of Woundwort taking shape. Despite the fact that it should have been one of the best episodes, I still found it a bit mixed in quality.

First of all, there are some brilliant scenes, revolving once again around the exploration of the deep mysteries surrounding certain characters. Campion starts off the episode, continuing in his position as chief of Darkhaven. Despite his attempts to force himself to blend in, it's clear he doesn't have the same killer instinct as the rest of them, repeatedly allowing Granite to live. Spartina does sum up an interesting point about his character, stating that 'only 2 things can turn a good rabbits heart to stone; Love and Hate. Which darkened yours?'. There must be some significance in the fact that Campion deliberately avoids the question.

Woundwort also has an interesting role. As usual, there's some humour between him and Vervain, with him saying he'd leave Vervain but not Silverweed. The most interesting point in his opening scene is when Woundwort describes his last terrible moments at Darkhaven, saying how loss and suffering hardened his heart and posing the question 'Without it, what would I be today?'. Silverweed's unexpected response of 'Happy?' has a profound effect on the General, with him angrily changing the subject. Could it be striking a little too close to home?

Much as the two characters work well seperately, it's when they finally reunite that the episode really takes off. The dialogue between Campion and Woundwort expresses the whole essence of the series, with Woundwort coldly threatening 'I'll send you to meet the Black Rabbit of Inlé'. Campion's reply of 'I've already met him General' is nearly as dark as the episode gets. I say nearly, as the next scene is the darkest. Campion tells Woundwort how he wishes to stay with the General in Darkhaven, something which Vervain doesn't trust in the slightest of course. Silverweed then looks in Campion's heart to see the truth. The response from Silverweed still makes me shiver, as he collapses to the ground in fear squeaking 'There's a darkness on his heart'. Campion tells how he's been touched by the Black Rabbit of Inlé. Has he though... or is he himself now the Black Rabbit? Woundwort does say he has been touched too. Despite this, I think it's hightly likely Woundwort only believes he has. Silverweed could still see into the General's heart in the last episode, but not Campion's, indicating that there is a clear difference between the two.

The other major plot idea of the episode is admittedly the one I hate. Hannah, feeling unable to help without Kehaar, decides to learn magic. I can't say I'm keen on this idea. Although there have always been mysterious less-than-realistic ideas with characters such as Fiver and Silverweed, it's always been on the path of vaguely plausible. Once they hit this point, they clearly decided to throw all that out of the window, and descend into ludicrous fantasy. It starts off as a bad play on the old 'Hedge-wizard' idea from Series 2, and very soon we end up with a time-travelling tortoise (if she's a tortoise... I can never tell!) who knows the secrets of the universe, and who is capable of bestowing magical powers on others. For a start, why would such a creature be a 'Hedge' wizard, considering how little she lives in Hedges. Even the animation of the scene looks off. I still can't decide whether they've been using CGI to create the fireflies, but it does look that way at points. It's a style which doesn't blend too well with the rest of the animation. I think that was the only major negative aspect I could find, and in my opinion it let down an otherwise excellent episode.

People may have said the series wasn't realistic in the past, however I can't help but agree this time the writers have gone a bit too far! 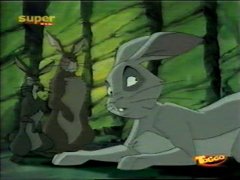 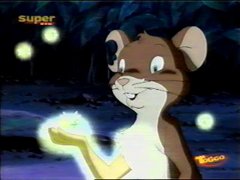