Episode Name
The Secret of Redstone

Synopsis
Undercover, Woundwort begins to gain the trust of the rabbits at Redstone Warren. Meanwhile, Blackberry finally finds out about Campion.

Favourite Quote
"That never bothered you in Efrafa?" - Vervain, in reply to Woundwort talking about how using force would make other rabbits hate him

Personal Review
On the German DVD of this episode, there's a short recap before the opening titles, showing a flashback to Woundwort's last encounter with Cowslip and Redstone Warren in Series 2. Alas, it turns out Cowslip isn't in this actual episode, but I suppose it's still nice to see the Redstoners once more, even if Hickory doesn't sound as good when he's no longer being played by Kiefer Sutherland. One of the strangest things I noticed about the reappearance of Redstone Warren is that the stones this time round actually seem....um... red! More so than they did in the earlier series anyway!

Seems the voices aren't the only things to have changed though. Redstone has fallen on bad times, with a hunter prowling the woods, alongside some suddenly very skinny looking elil. One of these elil did give me a silly little laugh mind. At one point we hear a Weasel outside the warren whispering 'Come out Longears, Or I'll come in'. Sorry, but I just can't help but think of the The Three Little Pigs at that moment... I'm half expecting that Weasel to say 'Come out, Come out little longears, or I'll blow your warren in!'. *cough*

Anyway (almost) back to the realms of reality, there's some interesting exploration of the emotions of the characters in this episode. We get to see Blackberry's steely determination to find Campion no matter what, once she finds out he's alive. When they are finally reunited it leads to a wonderful scene, one which I think must be high on the list for tearjerkers. It explores just how much Campion has become a changed rabbit; one who believes he died in the caverns, and who's only purpose in the world now is to serve the Black Rabbit, to the point where you feel deeply sad for him. Just how much has he really changed is the issue here. Afterall, despite his belief that his heart is dead, he does still worry for Blackberry when he thinks she's in danger.

The best bit about the episode without a doubt though has to be the interaction between Woundwort and Vervain... or as they call themselves at Redstone, Weedstalk and Chaf. There's a brilliant scene with them cramped in a burrow at Redstone, bringing out some of the best lines. Vervain suggests Woundwort just fights and overthrows the warren. Woundwort points out that they would then hate him... to which Vervain replies 'That never bothered you at Efrafa'. After some further moaning by Vervain about how Woundwort is taking up all the room, the scene is finished off nicely with Woundwort kicking the former captain through the air, and replying 'Now, I'm taking up all the room!'. The other wonderful scene between the two comes at the end, where they are caught by man. As the poacher carries them away in his sack, we can hear Vervain shouting and cursing the General and calling him an idiot.... shortly followed by the sound him being hit! When they're finally released, Vervain then falls into his usual cowardly tone about how 'I...I didn't mean it General. You won't hold this against me will you', to which Woundwort finishes 'Oh yes Vervain, I most certainly will'. Brilliant stuff there!

The whole 'caught by man' scene is an interesting culmination of Woundwort's mental state. Throughout this episode, you can't help but wonder if he's beginning to lose his mind. He's starting to believe he cannot be killed by anything, deliberately jumping in front of a Hrududu to force it off the road at one point (leading to an excellent scene with poor Vervain fainting from the shock). By the end of the episode, he even believes he can singlehandedly stop Man. A belief which is made stronger when the Poacher is then arrested and taken away by the police.

That does bring me onto my one and only gripe with the episode. The sheer unbelievableness of that policeman being there. It's a known fact that the UK Police force is so desperately underfunded that they have problems serving small rural villages these days... so how likely is it that a policeman would cycle by a canal in the middle of nowhere not once but several times? Yes, I know it's a cartoon... but a little sticking to facts like that wouldn't hurt anyone!

The interaction between Vervain and Woundwort in this episode was the best it has been in the series so far, making me laugh countless times. 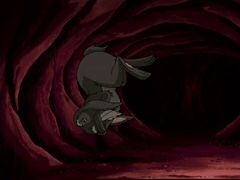 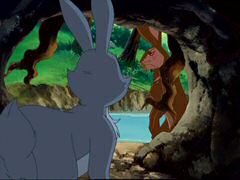