Synopsis
The Junior Owsla and Kehaar help an orphaned Hawk survive, whilst at the same time trying to prove to Hazel they are responsible enough to go on solo patrol.

Personal Review
Ah, good to see a central standalone plot this week, simultaneously mixed in with the running one of the series. That was something they never achieved in the earlier series'. Whenever they did a standalone plot back then, it was literally standalone; everything else was pretty much forgotten. The central plotline this week involves the introduction of a new character. An orphaned Hawk called Skree. He's not a bad character, although I do wish he would actually talk a little more than he does.

The kittens this week are becoming a bore. The cutesy little Junior Owsla routine was good at first, but I'm of the opinion it's fast becoming an irritation now, with them going out of their way to annoy all the rabbits at the Down. There is one stupid point, for example, where they knock over Hazel. Considering they yell 'Charge' ages before they actually reach him, why does he just stand there aimlessly? The only character of that Junior Owsla who is truly a worthwhile character is Pipkin. It is him who talks to all the animals, persuading them to pull off the trick collecting stones, and it's him who decides to help the Hawk. He also get's involved with some of the deeper issues too. Such as where he tries to discuss with Captain Broom whether it is justified to break a promise, if doing so will ease someone else's suffering. I think the deepest issue any of the other Junior-Owsla members could get involved with is who can cry the loudest!

The biggest plus point in this episode has to be the humour. Some of the dialogue between the characters is brilliant. Woundwort and Vervain are a case in point. In their first appearance, we hear Vervain being forced to mutter about how he's a coward, and a liar in order to please the General. There's also a later scene, when Vervain and Woundwort set a trap to kill whatever is following them, unknown to them that it's Campion. Vervain, in his usual fearful tone, asks 'What'll we do if it's not something of this world?', to which Woundwort replies, 'I'll let it take you'. Vervain laughs nervously there, assuming Woundwort is joking. Personally, I think he is. Although he would never admit it, and frequently pretends otherwise, Woundwort does seem to care about Vervain. He saved him in those caverns, and from that weasel in the last episode.

More humour comes from, rather unusually, Hazel and Primrose. They're talking about the Junior Wim... sorry... Owsla, with usual parental concern. Primrose suggests they go and look for them, to which Hazel replies 'And have the Junior Owsla think I don't trust them? Yes, let's go!'. Actually that parental concern is scary in that even Primrose seems to show it. At one point, she dives to protect her kittens from what her and Hazel believe to be elil. Huh.... Primrose caring about somebody other than herself? Perhaps it's an imposter! Kehaar is showing similar family ties towards the young Hawk, eventually deciding to fly off at the end to search for a mate. All in all, it's a very family-based episode.

Time for my little niggles. First of all, all these Owsla sayings Pipkin keeps quoting. Just how many are there supposed to be, and where in Frith's name did they come from all of a sudden? We've never heard them before! There's also the scene where Pipkin is discussing with Captain Broom about whether he should break his secret to make Blackberry happy. Captain Broom mutters to himself about how he 'wishes whatever it was, Pipkin would tell her'. Considering everyone knows why Blackberry is heartbroken, it surely doesn't take a genius to work out what that secret must be.

Some wonderful humour in this episode. Such a shame they insist on inflicting that Junior Owsla upon us! 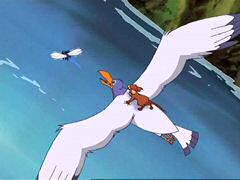 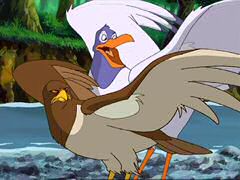