Synopsis
In search of Pimpernel, the rabbits travel to a nearby warren believed to be a place of safety. This warren, led by Cowslip, seems a little too good to be true... and it is!

Favourite Quote
"..No worries about Food or enemies, Just time! All the time in the World." - Strawberry

Personal Review
I loved this episode. Cowslip and Woundwort are 2 of my favourite characters, so I jump at the chance to see any episodes with them. The only gripe I have is the hideous close up shot they do of Cowslip at one point - have a look below, and cringe! Apart from this, the close-up shots are one of the great parts of the episode. Used with both Fiver and Bigwig to portray emotion in a highly effective manner.

The 'Buck's dont dig' storyline raises its head again, lthough this is where one of the more humourous aspects of the series is present. We see Blackberry asking 'who wants to dig first', and everyone points at Hawkbit. Better get used to that bit(below), as its part of the opening titles from episode 6. More humour comes from this plot later on, when we get to laugh at Hawkbit and Dandelion being soaked in the rain, because they havent dug enough shelter.

Away from the humour, some of this episode seems far too deep even for me to get my head around at the age of 17, so what chance the target younger audience have is beyond me. It raises the paradox of 'they will always live in safety, as long as they live in danger' - yes that sounds complicated and it is. There's also the point, which Im sure most missed, where the writers put across the view that ultimately man will always destroy nature one way or another. This is shown by the way, when Bigwig has escaped from a snare with a wooden peg, a metal peg is replaced, meaning the next rabbit will not be so lucky. This episode is certainly not one to watch when you've just woke up in the morning, or you're likely to end up with a headache.

The fact that it has Cowslip in gives it a high mark straight away. I was tempted to give it a 6, but I know there are better episodes than this, and Im saving that accolade for them. 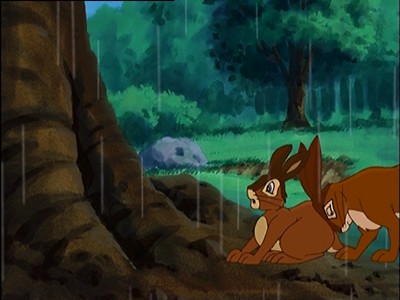