Synopsis
Vervain wanders about aimlessly, getting into all sorts of trouble. Bigwig, meanwhile, continues to push his Owsla.

Personal Review
Well, there seemed to be less of a main central plot to this episode. More a collection of smaller character-based stories. Despite that, I still liked it, mainly due to the combination of humour and some wonderful characterisation.

There's the 3 Owsla bucks for example; Dandelion, Hawkbit and Strawberry (who has lost an awful lot of weight, and I think now looks far too much like Pipkin!). Despite everyone's belief that Woundwort is no more, Bigwig continues to push the bucks into Owsla training, leading to some of the funniest scenes of the whole episode. First of all they don't take him seriously, mockingly hiding on the spot. Then that old chestnut of them being clumsy and incompetant resurfaces. It was last seen in the earlier parts of series 1, and was funny then. They manage to pull it off again this time, still with some original twists, such as Strawberry getting stuck under that treetrunk (mind you, given the amount of weight he's lost, I'm not so sure that really applies anymore!). The tension between those 3 and Bigwig builds up throughout the episode, leading to what I think is one of the funniest scenes yet. When the 3 of them go to complain to Hazel about Bigwig, that expression on their faces is absolutely priceless, and had me rolling around in laughter!

The Pipkin/Campion relationship continues this week. I say continues, as it didn't seem to progress any further. Pipkin is still repeatedly asking Campion to return to Watership Down, and he's still saying no. Just when is he going to take a hint! It's becoming repetitive now! I did find that stunt Campion pulls, jumping about on the rocks a little pointless as well. Then he starts teaching Pipkin, who in turn teaches his Junior Owsla. Just how many rabbits do we need to see doing that silly trick?

On the subject of the Junior Owsla, they've developed somewhat. It's great to see the kittens actually used properly in this series, as opposed to the pointless filler status they had before, but where is Periwinkle? Instead they now have a character called Mallow! Much as they are cute, they soon become annoying with their wimpy screaming and the other funny noises they make.

Without a doubt, the biggest character in the episode has to be Vervain, for a change. Seeing as it's him that the episode name is based upon, it does seem odd that I've left him to last, but better late than never. His traditional 'scared of everything role' is shining through. His friendship and loyalty is also explorer with the introduction of his new friend Aspen. He's a great character, always cheerful, with his head-in-the-clouds, eating Blackberries and chasing butterflies, and he contrasts wonderfully with Vervain. It's such a shame that they decide to kill him off with that Weasel after only a few minutes (and those Weasels have lost weight too!). It's then that Vervain's usual 'only bothered about himself' attitute rears it's head again, with him swimming away. I do sometimes wonder though, does Vervain really want to be like this, or does he really wish he could do something to help others? Infact, it get's to the point where I actually feel sorry for Vervain, when he gets caught in some wire in the river. In reality he's really a very weak and vulnerable rabbit, yet he's unable to express such emotion due to his expected strong face as Owsla captain. Once again, Primrose refuses to help. Much as it's arguable that he deserves it after the way he treated her in Efrafa, the writer's are always keen to show the Watership rabbits as different. In this respect, Primrose shows herself to be no better than the Efrafans. Thank goodness for Fiver being there!

Bad points. Well, it's becoming increasingly difficult to find them in this series, but there a few. I do wish they'd made Strawberry look a little less like a taller version of Pipkin for a start. I also feel they didn't do enough to develop the new character Aspen. In the few minutes we saw him, we saw a wonderful character; one with real potential. Yet he disappears almost as soon as we met him. *sigh* Finally there's that silly stunt which Campion seems to do, and enjoys teaching to Pipkin. I still can't see it being of any real use in a military capacity, so what's the point to it.

Nothing much seemed to happen for most of this episode, however there were some wonderful highlights, mainly due to the exploration of some of the characters. Oh, and that expression on Hawkbit, Dandelion and Strawberry's face (bottom left) is almost worth a star on it's own. =;) 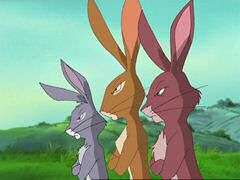 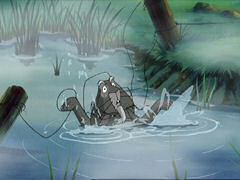