Synopsis
After the fall of Woundwort, the Efrafans and Watershippers must learn to live together. This brings its own problems, as Woundwort's legacy remains.

Personal Review
It's the episode after the one that came before this week... as if you could never have guessed that. =;) Now that Woundwort is gone, or so everyone believes, it's time to begin rebuilding life after Efrafa. That is the main premise behind this episode. Personally, I liked it. True it may not have been as good as the two episodes which have preceeded it, but that was a hard target to beat anyway. Even so, there's still plenty here to keep me happy.

In my opinion, the biggest selling point of this episode has to be the character interaction. It's interesting to see the Efrafan Owsla unable to forget their former position, as they continue to go around bullying the younger rabbits. It's also a laugh to see Bigwig fall out and start fighting with nearly every one of them. The psychological damage caused to the non-officer rabbits in Efrafa is also explored. There are some saddening scenes of a rabbit, it's spirit clearly crushed, instinctively bowing at the appearance of Chief Hazel, as well as fearfully begging Hawkbit for permission to silflay.

Hawkbit himself, along with Dandelion, has been awarded a brilliant subplot involving the new Efrafan doe Heather. There's a running storyline with the two bucks bickering amongst themselves over her, including a wonderful scene with Hawkbit biting Dandelion's tail (I still burst out laughing every time I see that expression on his face). This leads on to them deciding on a farm raid to see who can bring back the best flayrah to impress her. I do sometimes think Dandelion's climbing on the truck, only for the truck to start moving away is a little reminiscent of episode 16 (The Market) though. The culmination of the plot is where Dandelion ends up trapped in a well. I wonder whether this could be a token reference to one of the plots from Tales From Watership Down actually. All in all, some hilarious scenes, rounded off nicely by the look of horror on the two bucks faces when they realise Heather has already chosen her mate; Moss-rah, the name being another reference to Mr Adams' book. Wow someone's really been reading that this week.

The final character interaction is between Pipkin and Campion. Pipkin has an interesting role this time round. We hear him complaining to himself about how nobody listens to him nor respects his opinion. He's finally striving for independence. Could it be? Could he finally be growing up? Well, he did visually appear to age several years when they changed the character design for series 3, so who knows. Pipkin also has the honour of finding, saving the life of and striking up a friendship with Campion.

Campion's role, however, is the most interesting this time round. It transpires that he won't return to Watership Down, and raises the concept that 'there's no point, as he may as well be dead'. He also has some of the darkest scenes I've come across so far, where he keeps meeting with the Black Rabbit in his dreams. One of them involves a desert-like area, where the Black Rabbit shows him Woundwort is still alive. This does make for some really intriguing issues. If Campion can now be given messages and is working with the Black Rabbit of Inlé, is he really still alive? The second dark scene, involves a flaming tyre yard near some factories. The relevance of that location certainly isn't explained here. You can see Blackberry being engulfed by both Woundwort and the Black Rabbit. Obviously some sort of parallel is being drawn between those two dark characters. The accompanying music for the scene always makes me shiver too. Sticking with the Dark scenes, albeit without Campion this time, there is another one involving Woundwort and two other rabbits. We never learn their names, but within moments of bumping into Woundwort, they end up sinking to their deaths in the mud. Heck, we're only 2 episodes into series 3, and 2 rabbits have already died!

Looking at the music in a bit more detail, they've continued to excel in that field. As with episode 27, the combination of the 'traditional' music from series 1 and 2, alongside some of the new tracks for series 3 works brilliantly. I so wish there was another CD now, as most of this new music is wonderfully atmospheric!

Finally, the bad points. Well, not much. At least there weren't any 'black spaces' in the background artwork this week, but there were still a few niggling other things. For a start, when Hannah and Kehaar scout Efrafa, Woundwort is still there. Um... why? Surely there's been nothing worth staying there for all this time, especially if he doesn't want to be seen. The other thing I wonder is to do with his naming. As far as everyone I know is concerned, it's 'Woundwort', and is pronounced by the characters as such. Why then do the series creators, at least in the German version, persist with writing 'Woundworth'?

A Brilliant subplot with Hawkbit and Dandelion, as well as some interesting exploration of how Woundwort's spirit lives on in the Efrafans give this episode a high score. 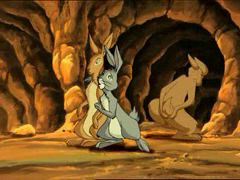 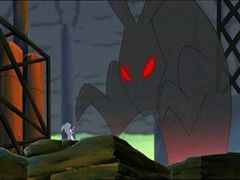