Synopsis
With the help of the other animals, The Watership rabbits go to war to finally destroy Efrafa. Meanwhile, Campion isn't as dead as everyone thought.

Personal Review
Well, where do I start? This episode was brilliant, and a much better season opener than that of the 2nd Series. Produced a year after the original 2nd series, things this time look... well a little different, and I'm going to look at that first, before coming on the the actual episode.

The main change is in the animation style. Traditionalists often complained that the first two series lacked the detail of animation that went in to the Nepenthe film. Well, this time, the animation seems to have been made even simpler. They've also changed the appearance of the characters. They're all lighter than they used to be. For some, such as Hazel, this isn't too noticeable. Woundwort, on the other hand has changed from Black to Brown, and Vervain has turned a strange grey colour. Pipkin has developed a patch over one eye, and the kittens have suddenly grown up, and developed some distinct characteristics (as opposed to the 'Primrose clones' we saw in the last series).

In terms of the music, Stephen Gately's Bright Eyes has been dropped (probably due to the legal wranglings they had with the record label in the last series), to be replaced with a brilliant new piece of music. In the episode itself, the music consists of a mixture of the old, in particular the brilliant Chase Theme, and some equally excellent new tracks. Whether all this new music was recorded for the original 2 series, but never used, I guess we'll never know. There have been changes to the voiceover cast. Whereas I havent heard the new english voices, it appears most of the celebrities haven't returned. That means no Rik Mayall for Kehaar, no Jane Horrocks for Hannah, no John 'Jump on the bandwagon' Hurt for Woundwort, and no Phill Jupitus for Dandelion. Richard Briers, who plays Captain Broom, seems to be the only remaining celebrity. On saying that, most of the non-celebrity voices are back, including my favourite Lee Ross (Hawkbit). It's just a shame I'll never be able to hear any of them, what with it only being released in English in Canada! *sigh*

Coming on to the episode itself. I've waited 3 years to see this and, even though I didn't have it in my native English, I certainly wasn't disappointed. It opens almost at the same place it left off, with Woundwort and his officers fleeing the collapsing caverns. It does show the often neglected fact that Woundwort does care about his officers, in that he hurries back to free a trapped Vervain. Outside, it also introduces a new aspect, as Woundwort tries to decide if Campion really is a traitor or a loyal officer. We see is that Moss is also against Woundwort's regime, although I think some of us had started to suspect that in the second series. On the subject of Campion, he crawls from the pile of rocks in the caverns in this episode, with half an ear missing, and bad scarring on one side of his face. He can see the Black Rabbit of Inlé... in fact the Black Rabbit actually has a chat with him, so is he dead or not? The dilemma for the series!

Back at the down, Hazel decides that the war has gone on long enough, and that it's time Efrafa was destroyed. This brings about an excellent excuse to reunite some old characters. We see the orchard and Bark the badger again. That was a 1-episode wonder in the second series, that was never seen again. Some humourous scenes there, with Bark grabbing hold of Fiver, and carrying him along. We also see Darkling, the bat from the start of Series 2. Strangely, those bats have took on an awfully sinister quality; they never looked that evil in the start of the second series.

All this leads on to the final battle, with all of the animals against the Efrafans. I do keep wondering if those rats are extras from Series 3 of The Animals Of Farthing Wood though! Of course, to add atmosphere, we have the obligatory thunderstorm, with lightning setting fire to main tree supporting Efrafa. Eventually, this leads to the collapse of the warren, and the death of Woundwort... or at least that's what everyone thinks. I do think they went a bit too far with this though. Getting rid of Woundwort is one thing, but destroying a perfectly good warren is blatent vandalism. I feel genuine sympathy for the General, as we watch the saddened look in his eyes as he sees what they have done to his warren.

Bad points? Well, there's a few. For a start, dont expect much in the way of continuity. That cavern was never collapsing at the end of series 2 and Hazel, Fiver and Bigwig didn't finish the series still underground. The animation did bother me slightly as well. Whereas it doesn't take long to get used to the new look characters, the general feel of the series seemed more careless than previously. This scene here for example hit me the first time I watched it...

Look at the bottom. Somebody hasn't filled the background completely! Now I'm of the opinion it's far too clumsy for a professional animation studio to be leaving mistakes like that in. Finally, there's the timescale of things. I believe they rushed into this far too fast. The Watership rabbits tried for 26 episodes over the first two series to defeat Efrafa, without any success. Here, they manage to devise a plan, gather their army, and pull it off all in about 23 minutes!

To be fair though, since it's such an excellent episode, those minor hiccups cant affect it's score.

A wonderful way to open a brand new series. Brilliant music, and an engaging plotline, although you do have to turn a blind eye to some of the continuity. 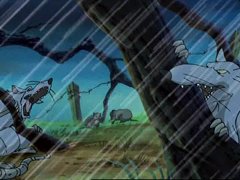 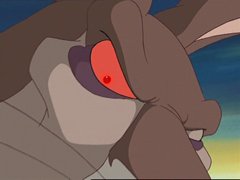