Synopsis
Vervain finds the rock tunnel leading from Efrafa to Watership Down, resulting in the launch of an all-out attack on the outsider's warren by General Woundwort. Campion is unveiled as a traitor... or is he?

Favourite Quote
"My Heart has joined the Thousand, for my friend stopped running today." - Hazel

Personal Review
Wow! After the long break of mundane pointless episodes, it's back to the main Efrafan/Watership plot for the series finale... and what a series finale it is! Without a doubt, they've saved the best to last. It is perhaps an irony that the most tragic of all the episodes, is also the greatest. Of course, series 3 does ruin the power of what happens here somewhat, so for the sake of this review, I'm going to ignore it's existance!

They waste no time in jumping straight into the plot, with Fiver's opening vision of a darkness spreading across the land. Could this be a somewhat toned down version of the classic 'field of blood' vision from the original? Even so, it's still a powerful image, and that strange piece of music they play always sends a chill down my spine. Although it sets the scene, it still doesn't prepare you for the ending.

We finally get to see good old Vervain again. This is where my argument over the filler episodes, in particular those Winter Specials comes in. Considering Vervain's attitude and opinion of himself, it seems somewhat far-fetched to believe they could keep him on a slave squad from Autumn until the following Spring, before he tries something. Anyway, we get to hear his manic laugh again, which always cheers me up.

The Does get to play a part this week. Firstly, we get to see what looks like Clover's kittens. I presume they're hers as, for once, they dont look as bland as Primrose. It does make me wonder who the father is though. Mind you, you can see Blackavar with her at one point, so maybe it's him. Blackberry hasn't been left out either, as she finally finds love in the form of Captain Campion. It does seem a bit too quick for my liking, but I suppose they needed something there to try and break up the love triangle between Hazel, Primrose and Campion. Whereas I'm not particularly fond of all this mushy stuff (bah, humbug), it does at least mean Campion's free from Primrose's evil clutches. Now only Hazel needs rescuing.

There were some brilliant lines in this episode. In fact, I was hard pressed to find just one 'quote' to list above. There's Campion's line about "Watership Down. I didn't know there was any place in the world like this.". He also brings about one of the great tragic ironies in the way he says "For the First Time in a long time, I can see a trail to tomorrow". You almost want to shout at him what is about to happen. Fiver also raises the overriding point of the series where he states, "It's madness! Rabbit against Rabbit! Fighting and Hatred! And for what?".

There's definitely plenty of action and tension in the episode, helped largely by the decision to keep the brilliant 'Chase Theme' playing almost constantly for the last 8 minutes. It is the final 3 minutes where everything major happens though. It is worrying to think that, after 26 episodes of 23 minutes, the biggest part of the series is a meagre 3 minutes! For a start, there's violence, with Woundwort sinking his teeth and claws into Bigwig. Based upon the normal cop-out method of 'showing just a shadow' to avoid depicting violence, it's a surprise to actually see this onscreen. I do think some of the Efrafans seem a bit weak though. Two of them at a time can be easily knocked over by the Watership rabbits.

It is in these final moments, Campion's role as traitor is also finally revealed. Vervain is his usual self, of course, in the way he big-headedly squeaks about how he 'knew it all along'. The climax of it all has to be the collapse of the rock though. This seriously left me unable to speak the first time round. Campion saves Woundwort's life, at the expense of his own. Bearing in mind the lack of any sort of death in the series, seeing this comes as a huge shock. Just when we thought we knew all about the mind of the captain, it reopens the mystery. Is Campion really a traitor, or did he remain loyal to the general to the end? We see some truly emotional scenes from all the Watership rabbits after that, and I'm not ashamed to admit they never fail to bring a tear to my eye.

Bad points about the episode? Well, I certainly have great difficulty in finding something to fault with such a brilliant episode, but I'll try. I do wonder just how Campion managed to find the entrance to the tunnel so fast. Considering he had as much information to go on as Moss, how come three Efrafan officers failed to find it, whilst this one could? Also, when the Efrafans first encounter Hazel and Fiver in the tunnel, why do they stand still on top of that dam. There's a good few seconds they just stand about, waiting for Hazel to release the water. Still, there just minor complaints, and certainly dont drag down the overall quality of the episode.

The best episode of the entire 2 series, with a tragic plot twist, fast-paced action, and highly emotional scenes. If you watch only one episode from series 2, make sure it's this one! 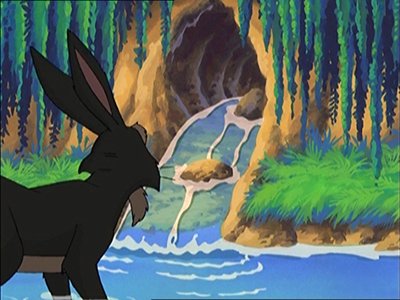 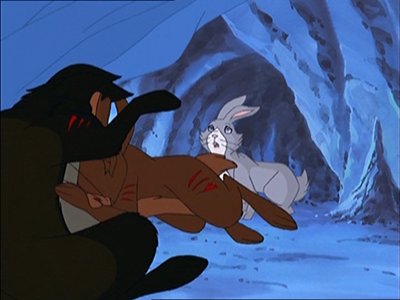