Synopsis
After an argument with Bigwig, Hannah leaves the Down, soon ending up stranded up a tree. With the help of Tassle, a squirrel, she must learn to be 'One With the Tree' in order to get back to the ground.

Favourite Quote
"If Bigwig gets himself killed over me, he'll never let me hear the last of it" - Hannah

Personal Review
The last Efrafan-free week this time, and it's another episode where not much seems to happen. In actual fact, the plot for this episode is somewhat strange, in that it differs from the original plans. Originally it seems this episode was to have Bigwig and Hazel going on an uneventful farm raid one rainy night. Meanwhile, Dandelion was going to tell the story of Elahrairah and The Black Rabbit, casting Hazel and Bigwig as Elahrairah and Rabscuttle, and Woundwort as The Black Rabbit. The original synopsis is still listed on the official site, and it actually explains why the German title for the episode is still 'The Legend'. I don't know why they dropped the original plans for it, and went with 'Hannah stuck in a tree' instead, as personally I think the original version sounded better.

Anyway, time to look at the episode as it finally appeared. It was nice to finally see Hickory again this week, as he hasn't been about since episode 17, and some of us are starting to miss Kiefer's voice. Mind you, Primrose is also back this week, after her mysterious disappearance last time. Is that a good thing or a bad thing?

The main character exploration this week, however, is with Bigwig (Not surprising for an episode called 'Bigwig's Way'). We get to see several aspects of his character, which haven't always been depicted clearly before. There is his usual arrogance and easily irritable mood, shown by the way he shouts at everyone as usual. For a change, though, we also see the caring side to him, in the way he's racked with guilt at having upset Hannah. He is even willing to stupidly risk his life, and forget all Owsla training when he thinks she's in trouble.

There's a few nice new 'see-us-once' characters this week. First of all, there's Marigold's kittens. Aww, they're sooo cute! Much nicer than Primrose's of course. =;) There's also the squirrel Tassle. My only complaint about her is that she does have a terribly patronising voice. I did have to laugh at her ultra scary insult to the owl as well, "Nobody wants you here beaky-face". Ooh, I think we could have found a serious competitor to Fiver's 'You smell of fish' comment for the most uninspired-insult award!

Bad points this week? Well, the plot didn't seem to have much point, but there wasn't anything drastically bad about the episode. There was the scene where Hannah falls from Kehaar, which caught my attention. How in Frith's name could a mouse survive a drop that far to start with, and just how likely is it she'd conveniently land on a branch. Also, is it just me, or does she fall in exactly the same way as Campion did in episode 12 (same angle, expression etc!). Ah well, I suppose the animators must get into a habit with these things.

Nothing spectacularly good, but there were a few comic moments, and some nice exploration of Bigwig's character. 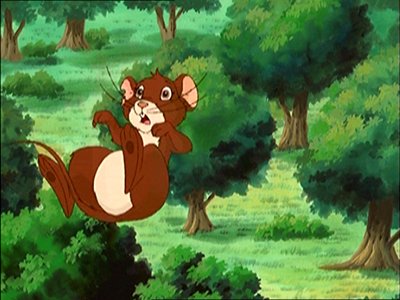 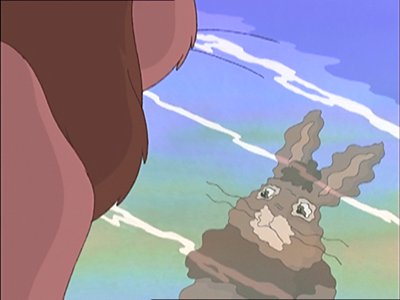