Synopsis
Two strange rabbits fool the Watership Down residents into believing they are the messengers of Frith, in order to live a life of luxury.

Favourite Quote
"They're never that keen when I ask them!" - as Fiver and Hawkbit rush off to collect food for the messengers

Personal Review
After they'd stuck those two Christmas specials in the middle of nowhere, surely they'll be back to the running storyline this week? Alas, it's not to be. This is one of a series of episodes with little point to them. It almost seems the writers were running out of ideas.

Still, this isn't the worst of the 'padding batch', as a like to call them. There are several humourous scenes, and there is something vaguely resembling a plot. Some creativity went into the animation of the two characters, Bluesky and Raincloud. Sadly, the same cannot be said about the English voiceover casting. They simply reused David Holt (Vervain) and Rob Rackstraw (Campion). Whereas this isn't too much of a problem in Rob's case, as he seems to be able to create many different voices, David still sounds pretty much the same. Every time you hear Bluesky talk, you cannot help but think 'Vervain' (or at least I do!).

Humour-wise, there aren't any hilarious one-liners this time round, not even from Hawkbit, however the humour is still present in other forms. When they start describing to Hazel how the messengers appeared, you cannot help but laugh. In reality, Bluesky and Raincloud were standing under a rainbow when they were first seen. By the time the tale gets back to Hazel, they apparently appeared with a strange glow around their ears, floating above the ground. I also found it funny where the rabbits keep stealing Hannah's burrow... although I do sometimes wonder why a mouse would have such a large burrow in the first place!

Rather unusually, Bigwig provides a few laughs as well. When told by the messengers that Hazel and Him have been declared the new Elahrairah and Rabscuttle, he pretends to act modestly. Despite his best attempts, it's still blatently obvious when he's trying to impress them, such as his line 'I happen to know there's a nice patch of clover over here. It's the sort of thing Rabscuttle would know, don't you think.'.

The main drawback of the episode has to be Pipkin. He's is in one of his especially bratty and whingy moods this week, crying like a baby to try and persuade the messengers to teach him to fly. The sort of mood he was in, I wish they really had told to jump off a cliff. I was glad when the stoat cornered him later actually for two reasons; Firstly, it serves him right for being a pathetic cry-baby, and secondly it was nice to see the animators draw a stoat, rather than another fox or weasel.

Overall, it wasn't a spectacular effort, but it could have been worse. I did at least have the last laugh where Bluesky talks of 'a warren called Efrafa'. Just the thought of Bluesky talking to his soundalike Vervain was enough to make me laugh out loud!

They almost seem to be having trouble filling some of the slots in the series now, and the use of 'Vervain' just keeps bugging me. 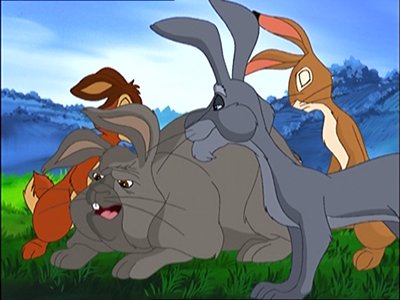 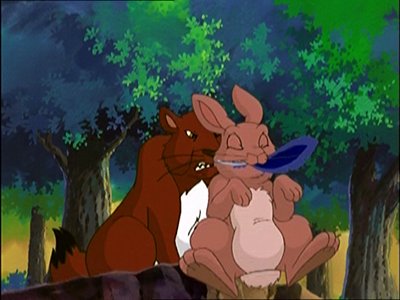