Synopsis
The lost Watershippers start to have doubts about Buttercup and her warren, as they find out Mans involvement in its running. In an attempt to escape, however, they run into trouble.

Some of the scenes also showed some really effective emotion. When Kehaar first says Hazel and the others aren't coming back, that horrified look on Primrose's face always sends a chill down my spine. I also cant help but feel my ears filling up as Pipkin desperately holds back the tears at that point. Similarly, the happy emotions from both of the characters at the end, helps finish a cold winter tale with a heart-warming glow.

In my opinion, the story of Frith's promise, as told by Pipkin, is also one of the better Elahrairah tales. The cunning plan by Elahrairah to trick Frith into returning to the world seemed fully believable, if perhaps the reason for Frith leaving in the first place didn't. 'He's gone to find out the secret of the universe'. As I recall, Frith created all the stars and the worlds, showing his devine power. Surely he would already have known the secret of the universe in which he created them. I really need to stop reading too much into these tales!

The most irritating part of the second special, however, has to be the involvement of man. It seems to me like a cheap excuse by the producers to somehow get a few Christmas carols into a christmas episode. We certainly dont need Fiver saying 'It's Frith's eve, and it sounds right'. Rabbits dont sing! (Well, unless you're from Cowslip's). Also, the rabbits didn't seem to take much convincing that these were 'kind humans'.

The only other thing which bothered me about the episode was the incredibly disappointing fight scenes. Bigwig charges angrilly at the rabbits from Buttercup's warren and... well who knows. They cut straight to a scene showing Bigwig running out of the warren. Then the rabbits pounce on Bigwig. Still no action-filled fight scene - instead just a poor 'shadow' in the hedge. We dont get this poor excuse for combat in the last episode of series 2, so why should it be used here. If they weren't going to show it properly, they shouldn't have bothered at all.

Slightly better than the first part, but still not enough to earn it another star. The emotional involvement of the characters was, in my opinion, well thought-out, and genuinely tear-jerking. 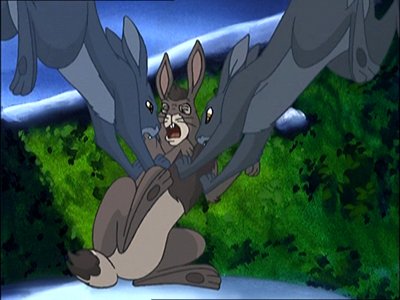 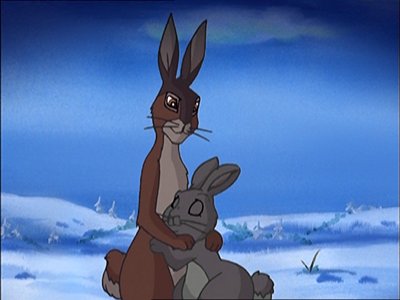