Synopsis
In search for food for the Feast of Frith celebration, the Watership rabbits venture out into the cold, winter weather, promptly getting lost and coming across a mansion with another warren.

Favourite Quote
"Dont tell me. This is the shortcut home!" - Hawkbit

Personal Review
Well, for a change, I'm going to start with a big rant, before looking at the plus points. The most obvious thing to bug me about this episode has to be the question 'Why is it here?'. Suddenly jumping to winter bears little continuity with either the preceeding or following episodes. Originally, it would seem the two Winter episodes were meant to be standalone specials. My only reasoning as to why they popped up in series 2 is that the producers were desperate for some episodes to pad out the second series. If it was meant to go here, why were they showing clips from it back in Episode 9?

Anyway, looking at the episode itself, it wasn't too bad. The dialogue was pure gold, with loads of memorable quotations. There were some great comic moments provided such as Hawkbit's line to Kehaar, 'Dont tell me... This is the shortcut home!', or Primrose's comment about Yona, 'I think she's the sort who's first to arrive, and last to leave'. Bigwig's strong character gets a good showing in the river crossing scene, with him shouting to the fox, 'You mangy flea-bitten excuse for a preDATAR!!!'.

I also have to commend the episode on the guest voices. Casting Dawn French as Buttercup is pure genius. Her voice seems to connect with Buttercup's character perfectly. I'd never have realised she could sound so convincing as a rabbit!

The plot was nothing special, I have to say. Getting lost, and finding some humans. Come on, I want Efrafa! Although I suppose that, due to the lack of continuity with this episode, including them would have been near impossible.

An interesting way to start the two Christmas two-parter, with some brilliant lines. It's brought down, however, by it's uninspired plot, and complete disregard for series continuity. 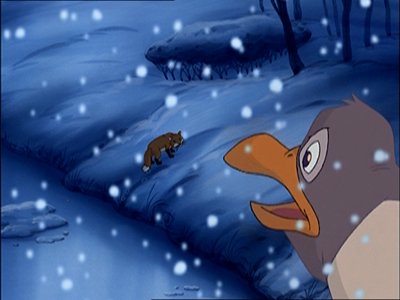 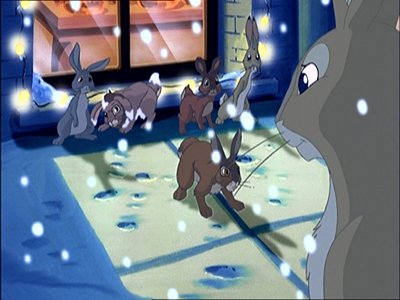