Synopsis
In order to free Campion, currently held prisoner in Efrafa, Hazel and co. use their cunning to trick Woundwort into believing Vervain has gone mad.

Personal Review
Hooray! They're back to the main plot involving Efrafa this week! It's just a shame that after this, we will see nothing more of them for 5 episodes. Still, in order to make up for things, they've made this episode one of the most entertaining of the entire 2 series!

The humour is about the biggest part of it actually. Perhaps it's a pity, though, that most of this humour stems from seeing a character suffer in one way or another. There's the cruelty to Hawkbit for example, where they cover him in mud to make him look like Frith's Messenger. It does make you wonder, however, how does being covered in mud make him look like a messenger? Personally, I think the Watership rabbits made it up as an excuse to get their own back on him, but who knows.

The other character who provides the main humour in this episode is Vervain. The Watership rabbits play upon his paranoia by fooling him into believing in Hannah Malana, the mighty hedgewizard! There are some brilliant facial expressions from him as he sees the unbelievable, like swimming moorhens, and singing Hedgehogs. You also can't help but laugh at him as he stands there proudly shouting out 'Stefar Lepar Dilicus' (Dont question my spelling on that BTW!), under instructions from Hannah.

Once again though, he suffers later for our entertainment. The look of sheer panic on his face at times, when none of the magic can be seen in front of Woundwort is hilarious. By the end, however, it does reach the stage where you have to feel sorry for Vervain. Whereas they'll say it's justified as 'He's A Bad Guy', I kind of think the producers are going against their own philosophy here. They were always keen to tell us how one of the overriding values of the Watership Down series was 'to teach honesty and friendship'. Here they contradict that by showing Vervain, who tells the truth, suffering and being placed under arrest. Meanwhile Campion, who lies through his teeth, is praised and rewarded! At least it's like real life I suppose!

Still on the subject of Campion, he has the rare honour of having some of the best lines in this episode. There's his retort to Vervain's interrogation where he shouts 'I wish you'd get into your thick head Vervain, I have no idea!' (Or words to that effect). Then of course, who can forget the later scene where Vervain shouts 'They'll tell you Campion's a traitor, sir!', to which Campion calmly mutters 'You're Salivating Vervain'.

There were a few minor rough patches with the episode, as usual though. Firstly when Vervain is showing Woundwort 'The Enchanted Trail', Campion has to hide a rosepetal left behind by Yona. If the rabbits have managed to cover every single trace that they were ever there, does it seem likely they would overlook something so obvious? Another scene which doesn't make sense involves Hawkbit. Whilst still covered in mud, he says, 'This had better work. I'm going to look like a carrot for weeks'. Yet a matter of a few minutes later, he's cleaned every trace of the mud off himself! Those weeks fly by incredibly quickly these days, don't they!

One of the funniest episodes of the series here, although I do think they're being a bit too cruel to poor Vervain! 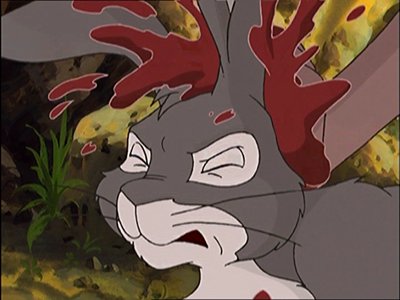 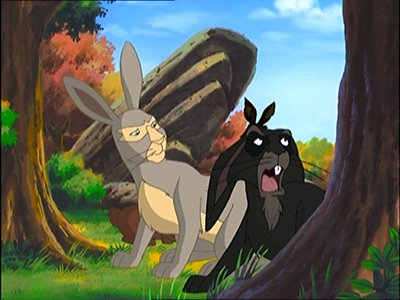