Episode Name
Home on the Down

Synopsis
The rabbits begin to settle into their new home on the down, however problems soon become apparent. The burrows need digging, but there's only one doe, and bucks dont dig!! There's also a weasel arrives at the down, meanwhile a mysterious visitor is looking for Bigwig.

Favourite Quote
"When the Black Rabbit comes to take you off to the land beyond life, you go!" - Bigwig

Personal Review
This episode was interesting, mainly in the way it explores issues affecting the organisation of the down. Firstly there was the age-old 'Buck's Dont Dig' argument to overcome, which both Bigwig, being an owsla officer, and Hawkbit, being eternally sarcastic support. There was one doe, Blackberry. This was a major change from the original plot of the Book and Film, and one which many, including myself, still dont quite understand the reasoning for. It does, however, allow the writer's to put forward an 'equal rights' argument, with Hannah the mouse trying to understand why should Does dig, but not Bucks. Anyway, seeing how the rabbits solve the problem by playing Bobstones is interesting, especially as it lets you see how to actually play Bobstones!(Pah, who needs video games!)

The other conflict to be explored is the one about 'Who should be Chief Rabbit - Hazel or Bigwig'. After Bigwig tell's all the rabbits to respect Hazel as leader, its humourous to then see Hazel tell the rest to pin down Bigwig only a few minutes later, making him do as he's told.

Two of the new characters in this episode take a good role. Whoever does the voiceover for the Weasel has it down to a fine art, and the artwork depicting Captain Holly as worn-out and battered is quite stunning. His voiceover actor also matches the part brilliantly. The only bit that does bug me is the way Holly refers to events at Sandleford, and how they all should have listened to Fiver. This seems to ignore the fact that the makers never showed people what happened before the journey to the Down so if you havent seen the film or read the book, you'll have no idea what he's going on about.

The additional characters, and debating storylines in this second episode earn it a 5 out of 6 rating. There's also still the wonderful music frequently playing in the background. 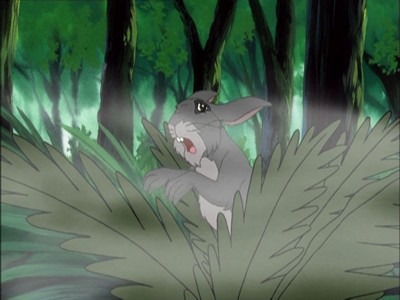 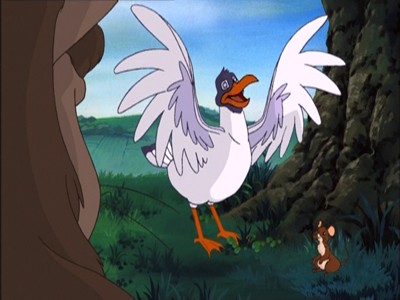