Synopsis
The Watership Down rabbits stumble upon an orchard, however it turns out there's a badger named Bark living there. After disobeying orders, Fiver is caught by the Badger.

Favourite Quote
"And When our ears are tilted like this, it means we're bored stupid!", Hawkbit, commenting upon how Bigwig tilted his ears to win at Bobstones

Personal Review
It's one of those episodes where they writers have comitted that sin they love so dear; They've started a deadly exciting storyline, leaving things on a cliffhanger, only to wander off on something completely different for a week. I want to know what happens to Campion (Well, obviously I know now, but assuming this was the first time I'd seen it!).

The episode itself was nothing special. It's what I call a 'filler' episode, in that it could have gone anywhere in the series, as the events of the episode have no bearing upon anything else which happens. Indeed, we neither see nor hear anything more of Bark or the Orchard until the later third series. We also finally hear the names of two of Primroses' million-or-so kittens; Gillia and Snowdrop. Once again, though, those names aren't heard again until series 3.

There were some good parts to the plot. You have to admire the amount of emotion the producers have portrayed via Pipkin. It almost brings a tear to your eye at some points (although not to the extent that the CITV presenters would have everyone believe!). This is also one of those times where Primrose tries to help. Once again though, I repeat my statements about how useless and selfish a character Primrose is. She says she'll be there for Pipkin if he ever needs someone to talk to, yet every time he tries, she disappears, or has something more important to attend to.

In keeping with most of the series, Humour plays a part this week. The recurring joke with Bark forcefeeding Fiver apples constantly is a laugh, especially the way you can see Fiver gulping with worry each time. As usual, there's also Hawkbit with another of his brilliant one-liners (These things nearly always seem to be the 'favourite quote'). Bigwig boasts to Hawkbit and Dandelion about how he tilts his ears in order to fool Hazel, and win at a game of Bobstones. Hawkbit, in that perfect sarcastic tone which Lee Ross has down to a fine art, replies 'And when our ears are tilted like this, it means we're bored stupid!".

As usual there were a few little things I have to pick fault with. First of all, they could have done a better job to hide the fact that the animators were reusing backgrounds. There's one scene where Fiver and Pipkin are on top of the down commenting upon how they can 'smell the apples from all the way up here'. They then run, arriving shortly at the orchard... hold on a second though. That patch of ground overlooking the Orchard looks familiar! (Check it out, and you'll see what I mean)

Another point which bothers me comes about later, where we see Hazel fall from a great height after being captured by an Owl. After dropping him, however, he makes a miraculous recovery, apart from a slightly hurt leg. How come he gets off so lightly, whilst Campion, who was dropped from a similar height in episode 12 ended up battered, scratched, bruised and unconscious. It doesn't make much sense, especially considering how much tougher than Hazel the Efrafan Captain is!

It's better than some episodes, albeit with a few minor issues. The biggest downer this time has to be that they dropped out of an important Efrafan Storyline for this! 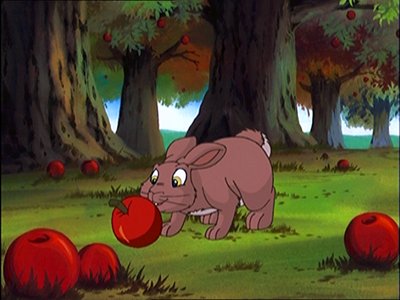 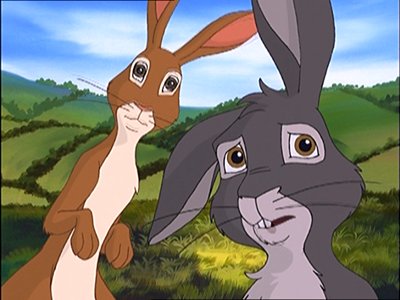