Synopsis
Cowslip isn't too happy when, with the help of the Watership rabbits, Hickory and Marigold leave the Warren of the Shining wires with their friends, so sets about exacting his revenge.

Favourite Quote
"I've never felt so alone. I'm an alien in my own warren." - Campion, commenting upon his spying duties

Personal Review
After two weeks with a pretty poor storyline, we're back to the good stuff and the main plot of the series this week. Both Cowslip and the Efrafans appear this time round; Can it get any better I ask? (Well, actually it can, but thats a story for another week!). Basically, the episode continues the plot started in 'The Roundabout' 3 episodes earlier (or 1, if you believe CITV's mixed up scheduling!), and it's one of those episodes where lots of things seem to happen.

Firstly Cowslip and Woundwort form an alliance. Now I think thats a clever use of the characters. I mean, it only makes sense to have all the Watership Enemies working together. It's also interesting to find out Cowslip's true opinion of the other rabbits in his warren. 'My Lies are truth... They believe it all!'.

Plenty of action follows, with Efrafa attacking Redstone, however not before Campion races back to warn them. I still dont like the way he says he did it for Primrose though. Obviously he's forgetting the sick way she played upon his emotions in episode 13, so I'll say this again! GET OVER HER! You can do much better Campion! She wouldn't do anything for you, would she? (Well, not unless she benefits in some way!). I liked the cunning plan by Captain Broom to rid Redstone of the Efrafans though... pretending the warren was infected with 'The Great Sickness' (well, actually it had been, but that was way in the past!).

Plenty of visions from Fiver this week (They've been somewhat lacking recently). Firstly he sees that Cowslip and Woundwort are working together. The more important one, however, is where he says 'A Warning comes from the Lonely and Brave, the one who will save us is the one we can't save'. This is pretty much a pivotal moment in the series, as it explains the course the rest of series 2 will take. Be prepared for this vision to keep popping up several times in the coming weeks!

Humour shouldn't be underestimated this week. There's a funny little scene with Campion talking to Kehaar, who tries to cheer him up by talking about the Big Water. You have to laugh at his description though, "I tell you about Big Water. Is big... and is full of...er... Water. Oh is very Big and..." etc. The look on Campion's face there is great. There's also a running joke with Captain Broom constantly being told to shut up by all the other characters.

Bad points about this episode. Well not a great lot actually... certainly nowhere near as bad as the last episode. When Vervain's patrol is tracking those 2 runners, however, I did find that a bit ludicrous. As Moss finds them hiding in the bushes, he stands there shouting "runner, runner!", whilst allowing them to run away. They then escape past all the other officers without any problem. In fact, had Cowslip not been there, they'd probably have escaped completely. It does make you wonder how Woundwort has managed to keep Efrafa under control for so long, if escaping is this easy. The only other thing to bother me slightly is when Campion is arrested. Vervain starts questioning Campion, and yet he can't come up with any answers. Considering his skills at lieing, you'd have thought he could have come up with some excuse. He's certainly managed by the next time we meet him, so why not now?

An excellent episode, uniting some of the best characters in the series. It's also one of those episodes making a vital contribution to the underlying plot of series 2. 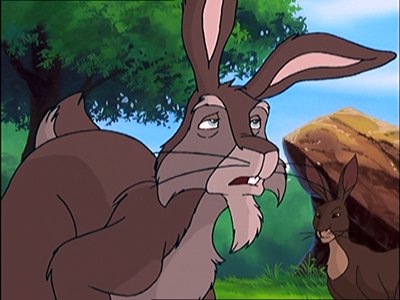