Synopsis
The Watership rabbits decide to journey to the Big Water, after Kehaar becomes homesick. Things don't go quite as planned though, when the rabbits end up at a strange new market.

Personal Review
This is one of those rare episodes in which nothing much really happens. Kehaar decides to go to the Big Water, and everyone goes with him; even worse is that they manage to drag this out for 2 episodes! Still, I suppose if every episode had the Efrafans in, things would probably become tedious.

Good things about the episode; Well, to be honest, I can't actually think of much. It's not so much a case of it all being bad, it's just that there's nothing memorably good about it. There's a few good scenes with Hawkbit, such as his annoyance at having to keep guard whilst everyone else eats, 'Oh fine, you stuff yourselves, and I watch'. I suppose some extra work has gone into the animation in this episode, although they didn't have much choice with it being a busy market. Mind you, I've always wondered why the animators seem to avoid depicting human faces as much as possible. Perhaps they're too hard to animate. Music-wise, we get to hear the lesser-heard 'Baroque theme' as it's known. It's the violin piece played when the market is first shown. The only other place it's ever heard in the Christmas specials, and in 'Bigwig's Way'.

Now for the bad parts. Well, the first one has to be the mention of Kehaar's bird 'Katrina' - This shows a total lack of continuity, as that isn't actually supposed to be her name, however more about that next week! There's also a scene where cornered by the dog, Fiver says 'I'd just like to say, it's been a joy knowing all of you'. Did they really have to include such a corny sounding line, when it was so obvious they were going to escape? Also when the rabbits are raiding the truck for flayrah, with Kehaar keeping watch, why did they include Kehaar saying 'Oh God, not gone five steps from Watership Down and we got trouble' (or that's what it sounds like), before saying 'look out Hawkbit! is dog'. If he'd shouted about the dog first, instead of that pointless narration, they would probably all have had time to run away to safety.

Nothing especially good about this episode, and the first hints of the major continuity error with Katrina, keep the score down to a meagre 3. 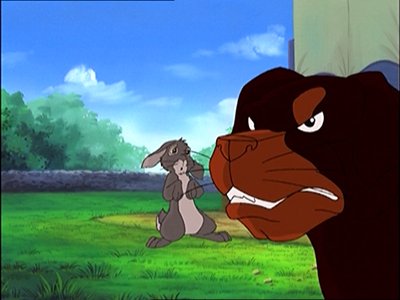 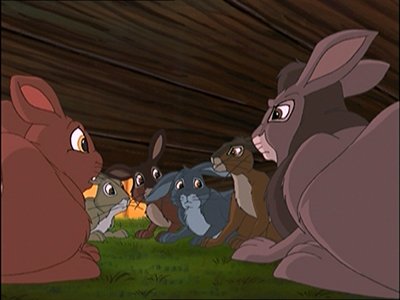