Synopsis
Hazel and co finally persuade Campion to help them fight against Efrafa, but Pipkin ends up being captured by the Efrafans.

Personal Review
After the mundane plots of some of the later episodes, we reach the first series finale. They certainly go out with a bang, with one of the best episodes of the series. The worst thing I found was that when it first aired in the UK, we had to wait 5 months for the second series to conclude things.

The episode opens with a tired, weak Madge in the Efrafan Owsla collapsing to the ground with exhaustion. Vervain, in his usual style, decides to leave him to die. The idea with this is similar to what they did with episode 8. It helps create the image of the sheer ruthlessness of the rabbits in Efrafa, and the terrible suffering the warren has to contend with under Woundwort's rule. This is continued later, as Campion watches the 'lowly' Efrafans suffer under the harsh regime of the warren. Undoubtedly it is this which helps persuade him to help Hazel and the others.

The macabre atmosphere is helped, rather unusually, by the weather. Throughout all of the episode, it is raining, with dark clouds in the sky, no doubt symbolising the darkness of the warren. In this respect, the animators have excelled themselves. They went to the bother of animating all the rabbits with their fur actually looking wet in the rain, helping add a touch of realism. The other place they pull out all the stops is with animating the number of characters. In the last few episodes, the majority of the lesser characters, such as Strawberry, Holly, Captain Broom and Blackavar had mysteriously been nowhere to be seen, despite the number of times we saw inside the warren. It was probably laziness, with the animators thinking it didn't matter as they weren't central to the plot. In my opinion, you cant just make them disappear altogether without reason, just because they dont speak. Thankfully some of those characters were back at last in this episode. Upon looking at the characters, we can also see the worrying trend of Primrose's growing family. In episode 10 there were 2 kittens... in this episode there are 3... and by the second series there are at least 4, although it becomes difficult to count them sometimes! ARGGH!!

Sticking with Primrose, this was one of the best things to come from this episode. Many people will have seen by now I do not have the highest opinion of her as a character, but I couldn't remember why (Irrational hatred? What, me?!). It was seeing this episode again in January 2003  that reminded me, or at least gave me a plausible excuse. At one point she fools Campion, so that Hazel and Bigwig can ambush him. Now that's why I dont like her. She's always struck me as a selfish character, who only does things to benefit herself. She cruelly plays upon Campion's obvious feelings for her here, as it benefits her in the long run, and she rather conveniently fell in love with Hazel earlier in the series, who just happened to be able to help her escape from Efrafa. Also look how little use she is in helping Pipkin later in the episode. He climbs in the river, and cries as the water overpowers him. Her response... pause.... 'Pipkin'.... pause again.... before she finally bothers to climb in after him, by which time of course it's too late! Then she has the nerve to blame Campion!! *sigh* I'm probably reading too much into this and raving like a maniac, but at the end of the day it's just my opinion... and besides it gives Johnny something to work with!

The bad parts of this episode. To be honest I couldn't find any major faults, which is a rarity for me. The plot does get a bit confusing at times, as you try to figure out who's betraying who, and what is the plan? It was almost making my head hurt at times. There is also a niggling little issue involving where Woundwort turns his back and walks slowly away on his platform. I'm sure they've used the exact same footage on at least 3 episodes now! It was moody and atmospheric the first time, but after that you really need something new...

A brilliant episode, with plenty of action, and some wonderful animation. It sets up a grueling cliffhanger and makes sure you'll be back for the next series. 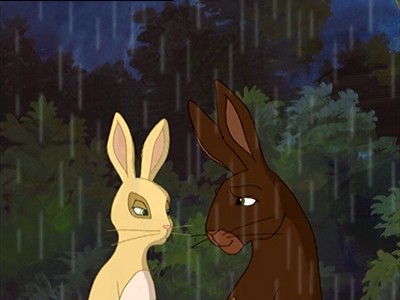 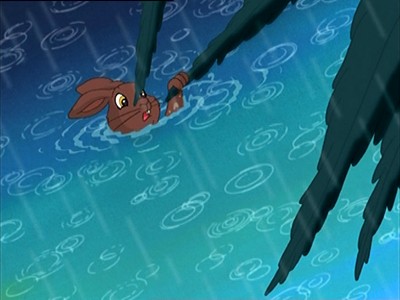