Synopsis
Efrafan Captain Campion is abandoned after an accident with a Hawk, leaving Hazel and the Watership Down rabbits to save his life.

Favourite Quote
"Do you enjoy undermining my authority?" - Vervain, to Campion

Personal Review
Yay! 2 Efrafan episodes in a row! Bearing in mind episode 13 has them in too, the end of the series is turning out to be very Efrafan centric; a good thing in my opinion, as it always results in better plots. The episode itself is interesting, in that it largely focusses upon dialogue between the two main characters, as opposed to lots of action.

Character development is prevalent in this episode, particularly with the Efrafan officers. We see the caring side to Campion, where he goes back to help the trapped Moss, and also how he mentions to Hazel his worry about the state of Efrafa - caring more about the welfare of the rabbits, rather than following Woundwort. It's also a great chance to see Vervain's 'out-for-himself' approach, and the deep jealousy he harbours towards Campion. You can definately see a smile on Vervain's face when that Hawk grabs Campion. You then hear him lie to the General later about how 'Campion pushed the officers too far', and telling Woundwort 'I tried my best, General', in his best grovelling voice.

There's a few comic moments in the episode, mainly thanks to the usual culprits Vervain and Hawkbit. Some of the facial expressions provided by Vervain are brilliant, and the scene where Bigwig subtlely hints at Hawkbit to leave the flayrah in the greenhouse gave me a laugh. At least in the German version anyway. There's also those two parrots; okay, so they may have terribly annoying voices, but some of their lines are great. Having heard both the English and German versions, I have to say that this is one of the rare times where the German translation comes out better than the original. 'Das Schlingaling' has more of a ring to it than 'The Slither thing', and also sets them up for one of their best lines; 'Das Schlingalingalingaling!' - brilliant! The whole 'Do you ever shut your mouth? No! Do you ever shut your mouth? No! Do...' argument also makes me chuckle.

Any bad points, I hear you ask? Well, come on! Do I ever let up my complaining! The first thing to bother me is the appearance of this Greenhouse in the first place. Why would there be a Greenhouse in the middle of the countryside, that we've never seen before, and never see again? There's also the strange way in which Campion falls from the sky. Despite falling facing the sky, hence all the branches hit the back of his head, he somehow ends with black eyes. Also all those cuts and scratches dont build up gradually as he falls through the branches; its a case of one moment he's fine, the next he's all battered and bruised. Finally there's a continuation of that little anomaly that appeared last episode, with the mysterious absence of the majority of the rabbits on Watership Down; as usual it's only Fiver, Bigwig, Hazel, Hawkbit, Dandelion and Primrose. Not even Pipkin get's a look in this week! Still, it doesn't affect the plot, so I'll let them off over that one!

A great episode, which does a brilliant job of starting the process of building up the Campion/Hazel alliance. That's going to become hugely important in the second series. 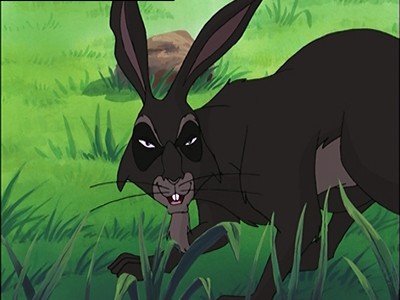 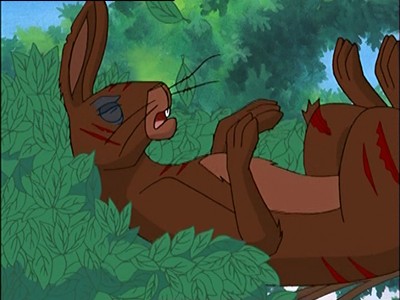