Synopsis
Hazel, Fiver and Hawkbit end up lost deep underneath the warren. In the process of finding a way out, they also find something even more useful!

Favourite Quote
"He always takes them in 3's"... "Yes, and in 2's... and sometimes individually!" - Pipkin & Dandelion, talking about the Black Rabbit

Personal Review
Well, I didn't think this episode was too bad. It was nothing special as, for a standalone episode, it featured one of those plots where nothing much seems to happen. It does, however, serve the function of setting up an important aspect for the rest of the series; Namely the Cavern tunnel to Efrafa. I said it wasn't bad, but then again I'm always going to be biased towards any episode where Hawkbit takes a lead, and where we get to see the Efrafans again.

Hawkbit's role in the episode is well played out, finally developing another side to his character. From most of the series, we're used to seeing him as a sarcastic and quite uncaring character, such as the way he treats Fiver in episode 9. This time, we see him in a completely different light, fearing being trapped in the caverns forever and letting insane paranoia get the better of him. It shows us that, despite the confident impression he makes towards others, he's really just as weak and helpless as any other rabbit. It also has me wondering, Could all his nastiness be purely a result of his own insecurity? Who knows!

As for the Efrafans... well I still have mixed feelings over this one. We get to see those two ancient looking guards that first appeared in episode 8 again. I've always maintained they look too old to be in the Efrafan Oswla. Still, they always give me a laugh, as they just look so.... well old! Cue the usual super-strength Bigwig to knock them to the ground of course. Luckily we do get to see the not-quite-so-old Vervain and Campion again, so that makes everything alright (I think!).

As for negative things, there were two major aspects that bothered me this week. Firstly, there's quite a big continuity error again. Whilst underground, Fiver talks of his fear due to the fact that they locked the Weasel underground in the caverns some months back. It's nice to see they remembered that bit, but they seem to have forgotten that they saw the Weasel out and about only 2 episodes earlier! In fact, he was out for revenge in episode 9 due to them locking him underground. Do the writers not talk to one another?

The second thing which bothers me is the mysterious lack of characters. As Hawkbit, Fiver and Hazel have gone missing, you'd expect to see everyone in the warren looking for them. Instead we only see Bigwig, Dandelion, Primrose, Pipkin and Blackberry. Where's Blackavar? Where's Captain Broom? Where's Strawberry? Where's Holly? Where are those kittens? (Please say dead... oops did I say that out loud!). Even in the closing scene, where the entire warren is down in the new 'back burrows', we still dont see them. Have they all been abducted by aliens or something? Still, I suppose that's about the only thing which really catches my eye in an otherwise fine episode.

It gets a 5, simply because it features so much Hawkbit and well... I like Hawkbit! 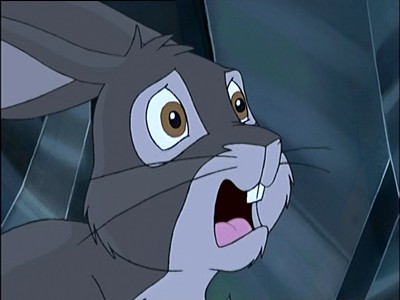 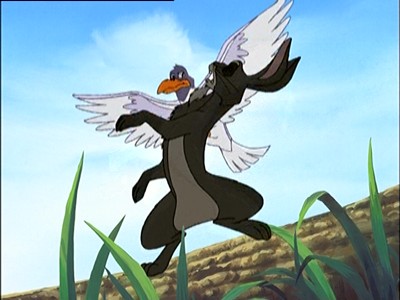