Episode Name
Tale of a Mouse

Synopsis
Hazel, Bigwig, Fiver and Hawkbit raid the farm to bring back flayrah for the new babies, however not everything goes as planned.

Favourite Quote
"Well I hadn't planned on playing Bobstones with her!" - Hawkbit, when told to try nothing fancy to distract the cat

Personal Review
Not one of the better episodes, in my opinion. This seemed more like one of the desperate time-fillers that become commonplace in the second series. Even the opening scene didn't exactly inspire me with confidence. In a similar vein to the Thank You Stars musical scene from the last episode, this one opened with View From A Hill. The main difference here was, where as TYS actually had a point, in that it was a love scene between Hazel and Primrose, there seems no point to VFAH. It spends the first 2 minutes with a collection of random clips, which as far as I can see bear no relevance to the following episode. Strangely though, this only happens in the German version. The english version starts straight into the episode, which explains why it is 2 minutes shorter than the rest!

When the episode starts, we do get to see some new characters. The first of Primrose's kittens, whose names we don't find out (well, we hear one of them later in series 2). They may not be the most imaginative characters, looking a dull cream colour like mum, with no trace of Hazel, but I have to be nice to them because they're really cute! It's also nice to see Hawkbit having fun with them, rolling about, rather than moaning as usual. I do have to question whether Fiver should really be stroking them like a pet dog, though!

We also get to hear another Elahrairah tale in this episode, this time with Rowsby Woof. Unlike some of the tales, this is thankfully a rather long one, and it's nice to finally see the fairytale world they're always depicted in at night, as every other tale is set during the day. I still dont know why Dandelion's voice sounds so weird when he starts the tale, but never mind.

This leads to Bigwig trying to pull off a similar trick at Nuthanger, to get into the garden. What I really have to question is where did that wire fence come from? Every time before, and every time after, they manage to raid the farm, with no such fence, so why's it suddenly appeared for one episode. It does help lead to the main point of the episode, where Fiver ends up trapped under the wheelbarrow. Anyone who pays attention to these episodes will notice that, although the series differs hugely from the book, most of the ideas in the books plot have been used in some way. Chances are that Fiver being trapped under the wheelbarrow at the farm is based upon Hazel being trapped under the Dog's Kennel in the original. Mind you, I do think they could have thought of something slightly more insulting for Fiver to shout at Tabatha (The Cat). "You smell of fish... stop breathing in here!" is hardly going to instill fear.

His way of escaping seems a bit odd as well. I know rabbits are good diggers but, whereas I'd have to check this up, surely he cant tunnel as far as he manages in less than a minute! If that was the case, why did it take everyone so long to build the warren. Oh well! Overall, I thought it was an okay episode. Not much seemed to happen, but I suppose there are much worse episodes to follow in the second series, so I'll still give it a reasonable score. Get us back to Efrafa storylines!!

The lack of much of a plot, and the wasted 2 minutes padding at the start of the episode result in this episode being given such a low score. 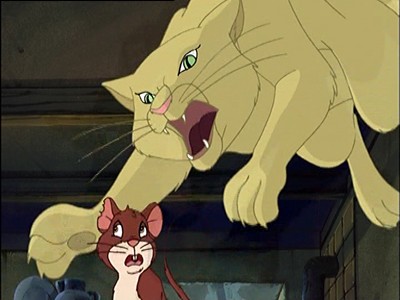 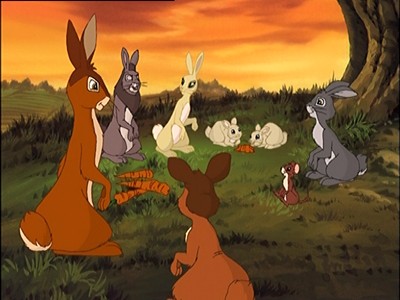