I've just returned from the preview screening of the new Watership Down adaption, a big co-production between the BBC and Netflix which is due to hit properly over Christmas 2018. Naturally I'm going to avoid giving too many spoilers away at this stage, and have only seen half of the whole series, but I can still give a few brief feelings on what we've seen.

The first thing that probably hits is the animation style. The story of Frith opens and, as in every adaption to date, takes on a very different style to the rest of the show, but you're soon in to the main film, and this is gorgeous. Some of character motion seems a little odd, however it doesn't take long for you to get used to that and focus on everything else. It's more than made up for by the sheer levels of detail and care in the artwork itself. Backgrounds and landscapes are beautiful, with proper cinematic panning and cuts, and the characters have so much detail and life put into each one. All I would suggest when it hits broadcast is just make sure to watch on BBC One HD if possible, otherwise you'll probably lose a lot of that detail (I don't know if it's been produced in 4k for the non-UK folks watching on Netflix, but hopefully they'll give it adequate bandwidth if it's just normal HD).

The pacing of the story as seen so far seems good, and is quite close to the original book structure in terms of how it's been broken up into 4 particular parts, although this is being combined to just 2 for the BBC airing as part of a late-decided change (the original 4 part editing was still in place for the BFI preview). The order of events also seems to broadly stick quite close to the book. Storyline changes don't seem as major as made with 1999/2000 series however they are there, and once again the violence has been heavily curtailed. I didn't find this detracted from it, however I know some people didn't like *any* change at all for the 1999 series, so if you're looking for a carbon copy of the book again here rather than giving it a chance to tell a story in itself, you may be disappointed. Some creative licence with characters has been taken, with some of them changing genders or others taking on different roles to before. And sadly some don't seem to have made it across at all in this adaption, meaning their role in the story has had to be filled by others.

A few bits of dialogue did feel out of place, using phrases or terminology which would make perfect sense to people, but which countryside animals would be unlikely to have any concept of. Whether this was a deliberate choice to make things more 'contemporary', or just something which got missed it's hard to say, but again it doesn't really detract much from the story.

Overall the combination of some beautiful art, and a brilliant voiceover cast (just wait until you hear Kehaar when he first appears) make for a fantastic adaption which has been worth the long wait, and you can see the amount of care that has gone into the production. A lot of this in particular came across with the group Q&A after the screening, where they'd brought together several of the people involved in the production, along with three of the voice actors - James McAvoy (Hazel), Nicholas Hoult (Fiver) and Gemma Arterton (Clover). All of these people were genuinely enthused with the show they'd been involved with, with the producers talking about the long journey of 6 years it had taken to get it from initial idea to completion. James was even wearing his favourite Watership Down T-Shirt for the occasion! It is a shame that the great Mr Adams himself is sadly no longer with us to see the completion of this production, however members of his family were there for the premiere screening and hopefully if reading this they'll agree it's done his famous book proud, and will help bring it to a whole new generation of people too. It's going to be a real treat for Christmas this year when all the parts finally go out. 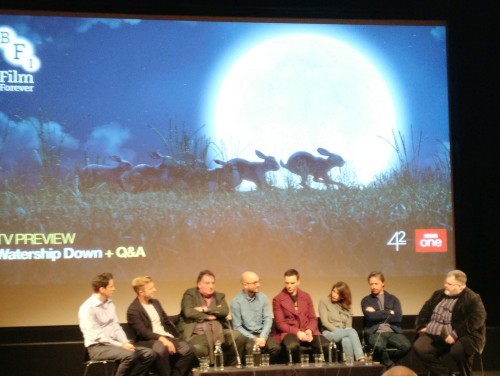