Synopsis
Hazel and the others start to plan the rescue of Primrose and Blackavar from Efrafa. This leads to friction between the cautious Hazel, and the carefree Bigwig. Meanwhile General Woundwort becomes increasingly desperate to find the outsiders.

Favourite Quote
"I'll make you scream for the Black Rabbit of Inlé, Primrose, but he'll be a long time coming!" - Vervain

Personal Review
The episode this week returns to the Efrafan storyline, and starts off a 2-part adventure. Thankfully, the producers didn't decide to place a completely unrelated episode in the middle either.

I have to say, I loved this episode. The development of the Efrafan characters and Woundwort's Regime is wonderful. We see the way Vervain bullies the other rabbits, as is his right as Captain of Owsla. In my heavily biased opinion, This does lead to the best part of the episode actually; Vervain trying to cause as much suffering for Primrose as possible. He shouts at her for not showing him any respect. Indeed, this leads to some of his best lines of the series, such as 'I'll make you scream for the Black Rabbit of Inlé, Primrose'. Later he also explains in some detail how to crush the spirit of the rabbits, describing how 'Their Eyes Go Dull. Their Ears sag. They lose the Spring in their Step!'. Nothing could paint a more vivid picture of life in Efrafa. To see Primrose suffering so much should of course create sympathy within the audience, however the effect was lost on me. I just sit there egging on Vervain to kill her.

Sadly (or luckily, depending upon your point of view), Vervain never does get to hit her, as Campion keeps interrupting. This gives us an early insight into how Campion is different to the others; how he believes the Oswla should not be abusing their power over the lesser rabbits. These traits of his character, will play a vital part later in the series. Despite Vervain's vicious approach, this episode is also used to depict just how weak he really is. At the first sniff of danger from a fox, he runs away. Sometimes, you have to wonder how he ever became Captain of Owsla in the first place. Another of Vervain's lines which stood out to me was where he comments upon the outsider's gull, saying "and My Best Friend is a Weasel". Could there actually be some deep meaning to that, as Vervain's sly, devious and... well... weasely nature is fast becoming apparent.

Of course, the Watership Characters have their part to play too. As usual, there's some great humour from Hawkbit. The episode actually opens with him being the misfortunate stepping stone for the others in an Owsla training exercise. You just have to love those close up shots of his facial expression! There's also an excellent scene later on, where Hazel asks who will help him rescue Primrose. When Dandelion volunteers, Hawkbit can be heard to mutter 'You're not impressing anyone you know'. Hawkbit then ends up being chosen to go instead of Dandelion.

The other main character aspect is between Hazel and Bigwig. Throughout the episode the writers build up the friction between the rabbits' two conflicting opinions. There's Hazel with his cautious approach, compared to Bigwig with his 'Act first, think later' approach. The climax of this is where Bigwig storms off towards Efrafa in a huff. This is used brilliantly by the writers, as they close the first part with Bigwig joining Efrafa. Of course, this is all part of the plan, but that isn't revealed until the next part, creating some brilliant suspense.

Nothing much wrong with this episode to be honest. There were a few instances which made the Efrafans look pretty pathetic though, such as the lack of anyone noticing the escape tunnel that has been dug. There's also a scene where Primrose and Blackavar are practically shouting about how they will escape, and find Hazel's warren, yet the Efrafan guard doesn't seem to pick up on any of this, only managing the words 'No Talking!'. Come on, This isn't the sort or poor military precision we expect from Efrafa!

A high score, but for the wrong reasons I suspect. The best bit of the episode is seeing Primrose suffer at the paws of Vervain. Mwah ha haaa! 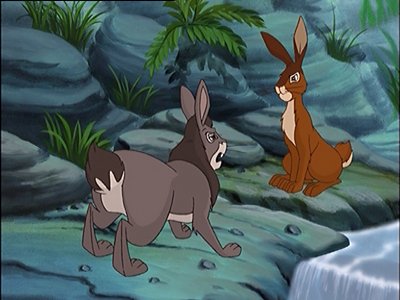